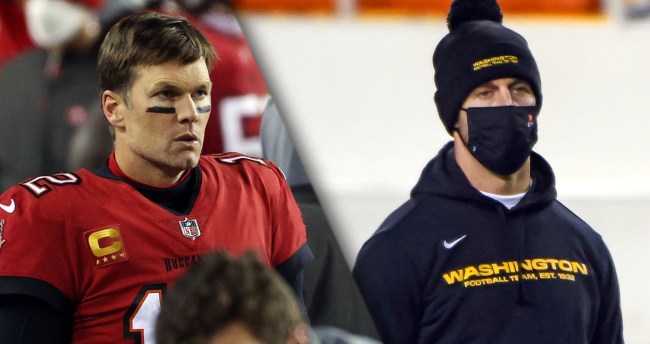 A mic’d up Tom Brady shared a great moment with fellow veteran quarterback Alex Smith after Saturday’s NFC Wild Card Game. He also had a very cool exchange with rising star Chase Young on Saturday after the Washington rookie said he was “coming” for Brady following the team’s win over Philadelphia the week before.

Smith, whose comeback to the playing field this season was nothing short of remarkable, didn’t get to play in Saturday’s game as he was nursing a calf injury, but Brady made sure to seek him out following the Bucs’ 31-23 victory.

When Brady caught up with Smith he told the 36-year-old signal caller, “Hey, I’m so f—ing proud of you, bro. You’re f—ing unbelievable, you know that? You are a f—ing inspiration to all of us. You’re unbelievable. Always here if you need me.”

“I appreciate that,” replied Smith. “Go get it.”

Brady and Chase Young also exchanged some friendly words during, as well as after the game.

“Hey, you know it’s all respect,” Young told Brady during the game.

“It’s all love. You know I love to play the game,” Young answered back.

Following the win, Brady met up with Young and told him, “Hey Chase. Way to play, bro.”

“What do you need?” Brady inquired.

“I need this off you [referring to Brady’s jersey],” answered Young.

As for Alex Smith and his future, he says he’s going to take a few weeks to think about it.

Regardless of what he decides to do, Brady was right, Smith is without a doubt an inspiration to all of us.