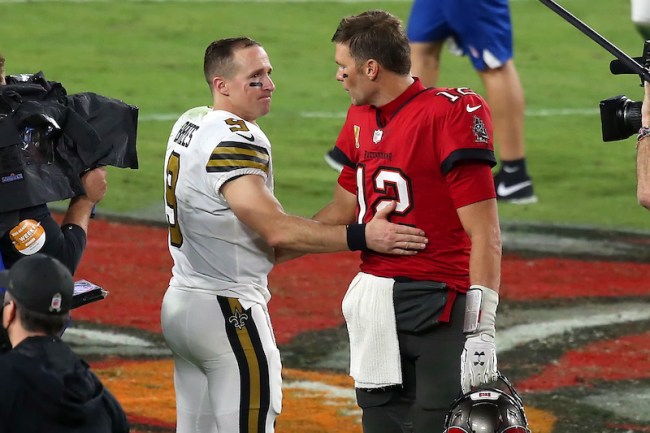 It feels as though Tom Brady is finally having fun playing football.

I’m not saying winning all those Super Bowls in New England weren’t enjoyable but Brady seems to be a little more lighthearted this season by making wiseass comments to former adversary Tony Dungy and doing a spot-on Rob Gronkowski impression during press conferences.

Brady’s latest joke is a graphic on his Twitter account in response to a fan saying that every single Brady game from here on out should be played on The History Channel.

The 43-year-old quarterback responded with a photoshopped graphic of what that History Channel matchup with Drew Brees – age 42 – will look like in a few years.

Drew Brees was made aware of the graphic and responded to his new, college professor look.

When the Tampa Bay Buccaneers play the New Orleans Saints on Sunday, Brees and Brady will be the oldest quarterbacks to face-off in NFL history. The adversaries are a combined age of 85.

The previous record was a combined age of 84, back when Brady and Brees met each other twice during the regular season.

Last Saturday, Brady became the oldest quarterback ever to play in a playoff game. The previous record was set by George Blanda, probably after smoking half a carton of cigarettes.