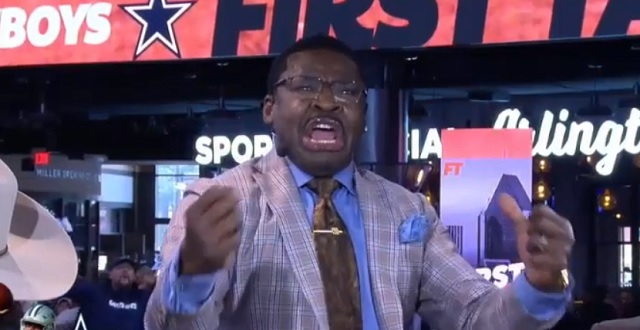 This morning First Take went live from Dallas before tonight’s Cowboys-Titans Monday Night Football game. Cowboys legend Michael Irvin was today’s guest on the show and as soon as he got on the air he went absolutely apeshit on Stephen A. Smith about the Dallas Cowboys.

Tonight, we’re going to see the dawn of a new day the beginning of a new age, and a time when the Cowboys will rightfully regain and take their proper spot among KINGS!!!!!

Dak Prescott put up the greatest rookie season EVER. And then last year without Ezekiel Elliott for six games, he had game missing playoffs. All of this rhetoric ya’ll singing out of your mouths like your Donna Summers or something is just noise. Dak Prescott is a big-time player.

The Internet had some jokes about Irvin going nuts and hyping up his Cowboys on First Take.

He's ranting about a 3-4 team. pic.twitter.com/Wx24mvSlLd

This is also every cowboys fan when you try and be rational and tell them they been trash for decades https://t.co/j19aWgVRT3

This is CTE on live television… never thought id see the day https://t.co/lRUApIIHDV

There is no chance the shittt @dallascowboys will be good soon. No matter how loud and coke filled Michael Irvin gets

Michael Irvin on First Take, high off the finest of cocaine, sweating like a crooked preacher on first Sunday

Michael Irvin off the big blow this morning.

He up there sweating like a pastor in Atlanta.

Michael Irvin has the cocaine sweats on tv right now