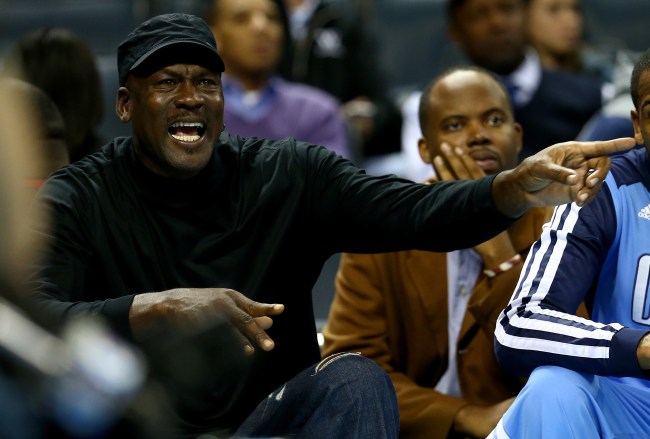 We all know that Michael Jordan is one of the most competitive people on the planet; and if you need more proof, go back and watch The Last Dance documentary as a reminder. Literally, the guy just hates to lose, and he’ll hold a grudge against anyone who has ever bested him. Hell, even the people he beats, he makes sure he rubs it in their face in a weird, charming, playful way; just because he can.

Although the six-time champ hasn’t played in the NBA since the 2002-03 season, that doesn’t mean he hasn’t had the itch to step on the hardwood and get the best of some people. At this point, stories of Michael Jordan the owner coming to play his Charlotte players are legendary, with a bunch of them out there to remind people how much His Airness loves schooling guys — even if they are current NBA players who are decades younger.

But that doesn’t always mean Jordan plays fair. In fact, according to former NBA big man and current ESPN analyst Ryan Hollins — who once played for MJ’s Charlotte Bobcats/Hornets — the GOAT would pull every sneaky move possible to try and beat players in games of one-on-one. Take a look below at what Hollins had to say on the Scoop B Radio podcast.

“I might’ve put Michael on the IR with some elbows and some fouls man…! But you know, he set up about two or three times, they played some 1-on-1, they closed the gym off and it was him, Gerald Wallace and Raymond Felton and a couple of those other guys and they just played like a game of ones or a game of knockout. And you know, everything that I watched before, it kind of went all the way dark.

“Michael plays by no rules. He’s the OG of the OG’s and he hates losing. So, there is no such thing as a foul from his standpoint and when he’s guarding you, he’s going to call his fouls. So, he’s every old guys pick up game and that’s how it went down. You know you gotta have respect for Michael because even to this day, I cant even imagine man; if you’re playing two dribble or one dribble limit man, he’s going to be able to get his shot off against anybody because Michael’s skill and Michael’s footwork is so impeccable.

“They talk about the most skilled of all time you think Larry Bird and in today’s NBA you talk Luka Doncic. When you go back and watch Michael, he was so, so sound with that Dean Smith footwork.”

If this doesn’t sound like the nightmare of every rec league and/or backyard hoops game ever, I don’t know what does. There’s always that one guy who expects to get calls, and, in this case it was Michael Jordan. Nobody likes that guy, but, as Hollins mentioned, you’ve got to respect the guy: It’s MJ.

Given the fact Jordan’s now 57 years old, maybe he’s taking more time observing practice and less time trying to slyly beat NBA players in one-on-one. Knowing his competitive fire, though, that’s probably not the case at all — so mad respect to all of MJ’s tricks.