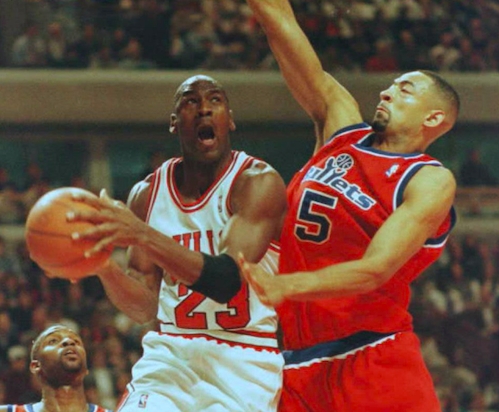 Michael Jordan was a sniper on the basketball court. A cold-hearted killer who had no shame in embarrassing his opponents all in the name of winning. Whether it was shooting a free throw with his eyes closed to prove that he’s that good, dropping a double-nickel less than a month after returning to the NBA after his short stint in baseball, or leading his Chicago Bulls to six championships during the ’90s, MJ’s the GOAT because he has a fire that burns inside him like nobody else.

While that’s how most of us remember Michael Jordan the player, it turns out that he wasn’t all ruthless all the time. In fact, while Jordan’s hoops persona was all about trash-talking and challenging opponents in order to win, when there wasn’t something necessarily at stake, the dude proved to be a pretty nice guy publicly. A recent example of that came from new Michigan Wolverines hoops coach Juwan Howard, who played in the NBA during Jordan’s heyday.

Appearing on the The Dan Patrick Show today, Howard shared a story about Michael Jordan’s kindness that might catch some people a little off-guard given his competitive nature. It came after Howard’s rookie campaign, where he hired a new trainer named Tim Grover — who was also Jordan’s trainer. With Grover saying he was going to L.A. all summer long to help keep Jordan in shape while he filmed Space Jam, Howard made sure to follow him there and work out with the GOAT. There was just one problem: Juwan didn’t have a place to stay, so he was going to wing it in hotels that could’ve cost a fortune for the entire offseason.

After arriving in Los Angeles, Jordan was so impressed that Howard decided to dedicate himself to train that he offered the second-year player a room in his house for free. Here’s how Juwan Howard described the scenario to Patrick.

“It was the summer of ’95, MJ had the Space Jam movie that he was shooting up in L.A. And they built a dome for him [to train in]. Tim Grover was his trainer at the time. Tim was leaving Chicago, and I was training with Tim. This was going to be my second summer training with Tim Grover, because I had hired his services. So he told me, ‘well I’m leaving for LA for the summer to go work with Michael… and I’m thinking like ‘who am I going to have to work with me? I need to get better.’

Tim didn’t offer the invite, but I said ‘you know what? I’m going to LA. So I picked up my bags, moved to LA for the summer, and my plan was to stay in a hotel. Something like an Embassy Suites, something that is very inexpensive – but I knew I would pay a lot of money. And I knew I probably didn’t have the money to pay for a hotel for the entire summer. But I was going to give it a try.

The first day I traveled to LA, I got to the gym, and MJ had heard I was going to be there, he was looking forward to me working out with him. So he offered to give me a room in his house that he was staying at. And I’m like, ‘you know, I don’t want to impose on you.’ He’s like ‘no, you know what, my wife is leaving, I have plenty of room, you can stay with us. I just appreciate the fact that you flew all the way here to come work out.’

That was just so nice and kind for MJ to do that. I will never, ever forget that. I got a chance to work out with him the entire summer…. MJ is that type of guy. He’ll give you the shirt off his back, but when it comes time to lace up on the court and you’re standing side-by-side and you’re on the opposite team, you better believe he’s going to do whatever it takes to win.”

That’s a pretty dope story, and sort of humanizes Michael Jordan a little bit — especially as someone who was/is pretty private and one helluva competitor no matter who he was going up against. And, whether it was a byproduct of working out with Jordan or just pure coincidence, Juwan Howard did go on to post a career-high scoring average of 22.1 points per game, made the All-Star team and landed himself a spot on the All-NBA third team, so the decision to get to L.A. to train with the best may have paid off.