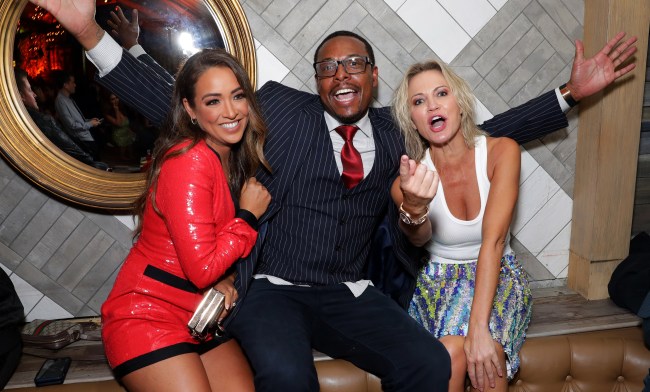 Michelle Beadle’s broadcasting career is about to take another turn as it being reported that she is in the midst of negotiating a buyout that would result in her leaving ESPN again.

According to Andrew Marchand of the New York Post, Beadle, who makes $5 million per year and has several years left on her ESPN contract, is working with her reps at CAA to figure out her next career move as they negotiate her exit from the Worldwide Leader.

There had been previous talk that Beadle could possibly just move from ESPN to ABC, but it appears that is no longer an option being considered.

The more money she leaves with, the less chance she has to quickly work someplace else. In any deal, there is expected to be a non-disparagement clause, meaning she will be unable to speak ill of ESPN if she wants to keep her money. There is no timetable for how long talks will take.

Marchand also mentioned Beadle is taking a look at several options including the possibility of going back to work for the man who gave her that $5 million salary after NBC “couldn’t wait to get rid of her,” her former boss at ESPN until he resigned because of cocaine addiction, John Skipper.

She could try to do something smaller, centered around a podcast, or she may try to dive back in.

They have reached out to Turner about its NBA coverage, according to sources, but there doesn’t appear to be a match. Turner is set on Thursdays with Ernie Johnson hosting, but is trying to spruce up Tuesdays. At the moment, though, Beadle is not a top choice.

There is a feeling she could end up at the paid subscription site DAZN. Beadle signed her ESPN contract under then-network president John Skipper.

Beadle initially began working for ESPN in 2009 as co-host with Colin Cowherd of SportsNation.

From there she went on to do work on ESPN Sports Saturday for ABC and as a guest host on Mike and Mike in the Morning.

In 2012, Beadle left ESPN for NBC Sports and NBC property Access Hollywood. However, in 2014, Beadle was released from her NBC contract early and re-appeared on ESPN as co-host of SportsNation.

Beadle then began hosting NBA Countdown in 2016, and in April 2018 she was named a co-host of ESPN’s new morning sports show Get Up! Four months later, Beadle left Get Up! following comments she made saying she was boycotting football.

Reports then surfaced that claimed Beadle was a “bad teammate” after essentially being a no-show on Get Up! and failing to promote her program on outside venues.

Approximately one year later it was reported that Beadle would be replaced as host of NBA Countdown on ESPN by Maria Taylor and/or Rachel Nichols.

So wherever the 43-year-old TV personality ends up, here’s to hoping that she can remain in that capacity for more than two or three years. Since 2009, that’s definitely been a problem for her.