Mike Leach’s Pitch To Get K.J. Costello To Transfer To Mississippi State Was Brilliantly Simple 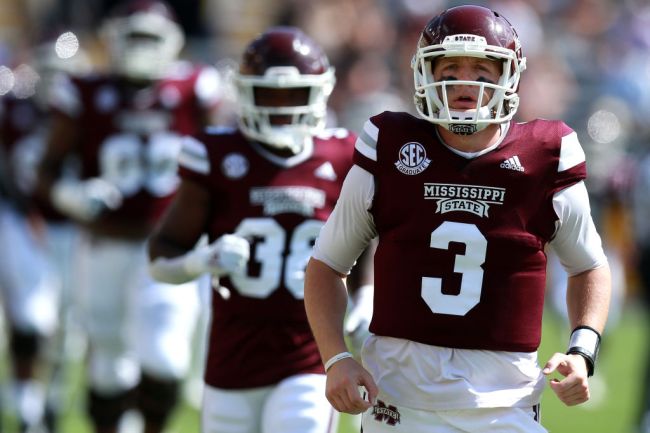 Mississippi State quarterback K.J. Costello is already a college graduate. In fact, he graduated from one of the premier universities in the country, Stanford, but wanted to continue playing football with a year of eligibility left and elected to transfer to Mississippi State.

It’s not too common you see a guy raised in California and a graduate transfer out of Stanford land in Starkville, Mississippi, but that’s the route Costello took. The question here is why and the answer to that question is Mike Leach.

Leach is not only one of the great characters in all of college football, he’s also one of the best offensive minds in the game. And while he’s known to go on bizarre rants, he keeps things pretty simple on the recruiting trail, apparently, at least with his quarterbacks.

Leach’s offenses are known to throw the ball all over the field and that’s exactly what he brought to the Bulldogs, which is exactly why Costello landed in Starkville.

As for the actual pitch Leach delivered to Costello, according to Dennis Dodd of CBS Sports, he simply said “come to Mississippi State, and you can lead the nation in passing.” For a quarterback that wants to throw the ball, that simple pitch seems to have been mighty effective.

“It wasn’t really just that,” K.J. Costello told CBS Sports this week. “It was more the idea I’d already been in a pro-style system. … We were trying to control the game — control the ball and play really good defense. We put a ton on the quarterback but didn’t necessarily open it up, get five guys out in the pattern almost 80% of the time. … I wanted to experience some of the Air Raid.”

So far so good for Costello and the Bulldogs. He threw for 623 yards during State’s huge upset win over LSU in Baton Rouge in the season opener. We’re only a week into the SEC season, but Costello could easily lead the nation in passing yards this year.