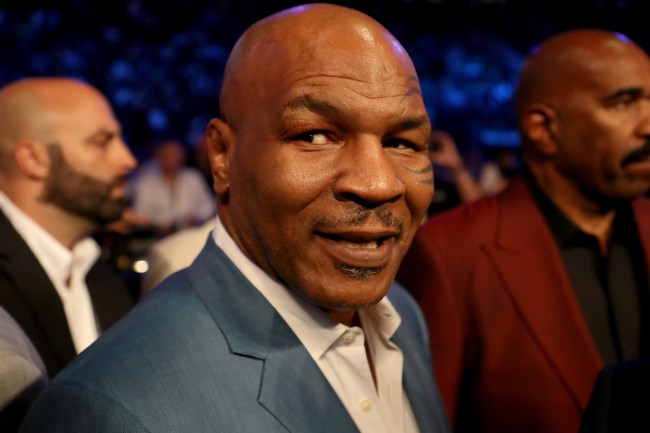 Mike Tyson was once considered to be the baddest man on the planet, with the former heavyweight boxing champ known for his short fuse and vicious knockouts. In the ring, Tyson was an absolute menace, terrifying (and terrorizing) opponents by simply walking into the arena with a certain intimidation. Outside of it, Mike Tyson was a mess, though, known for his lavish lifestyle and, worse, an abusive personality that mirrored his athletic performances.

Nowadays, though, Mike Tyson is a helluva lot calmer. Maybe it’s the wild amount of weed he claims to smoke, acceptance of becoming more of a cult icon than an all-time great fighter, or something else, but he’s learned from his previous mistakes and seems a lot less intimidating.

Given the fact that Tyson has gone through his own transformation over the years, he knows what it takes to repair a damaged image, and the former heavyweight sounds as if he wants to help another superstar athlete who has a bit of a mean streak do the same thing, lending some advice to UFC star Conor McGregor, who has been in the news for everything but fighting over the past couple years.

Whether it was McGregor punching an innocent, older man at a bar in Ireland this past spring, or his absurd fights outside of the Octagon, Mike Tyson wants to see the 31-year-old succeed outside of sports, and gave him some A+ advice in order to try and do that.

As a guest on Ariel Helwani’s MMA Show, here’s what the former boxer said McGregor needs to do to commit to turning his life (and image) around.

“Conor has to look inside himself and (say): ‘What happened? Why am I the way I am? And how do I stop this from continuing to be?'”

“All of a sudden you start fighting, doing something you love to do, and you do it easily and all of a sudden they give you a lot of money for doing it. But you have no restraint, no control, you don’t know what to do. You give it away. You buy people gifts that don’t deserve gifts. You just don’t know what to do with it. You feel you don’t deserve it.”

Mike Tyson brings up a lot of good points here, admitting that it’s easy to get caught up in the fame and forget about who you really are and the struggle it took to get there. And, even though Tyson’s over his previous struggles, he still opened up to Helwani about some of his regrets, learning from those experiences to better himself; something he hopes Conor McGregor can do as well.

“That’s not who I am now. I don’t know him anymore,” Tyson said. “He’s almost like a stranger to me. I look at him, and I’m proud of him. And I think he’s spectacular. But there’s a real dark side there that I don’t like getting involved with anymore.”

Who knows what’s next for Conor McGregor’s athletic career? He’s a cult icon in his native Ireland, has a successful whiskey brand and millions of dollars, but if he’s known as nothing more than a jackass who gets in trouble, is it really worth it? Hopefully he can make some changes and drop that tough guy image as Mike Tyson suggests.