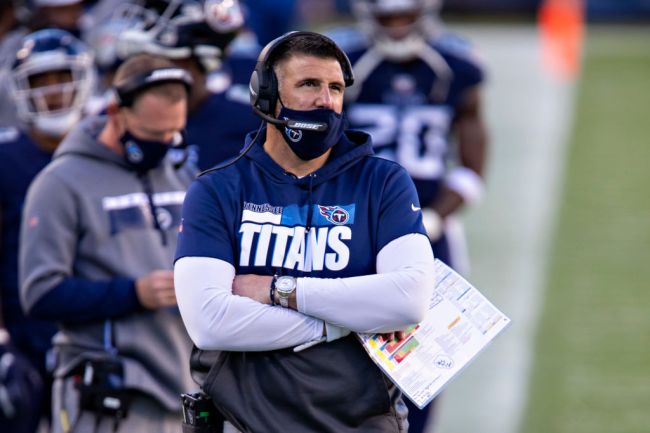 Mike Vrabel once said that he is willing to cut off of his penis if it means that he will win a Super Bowl as a coach. His on-field decision making doesn’t support that notion. The Tennessee Titans hosted the Baltimore Ravens in Sunday’s NFL Wild Card game and fell to the visitors by a touchdown. While a single play doesn’t define an entire game, there was one specific moment that brought a lot of criticism to the losing coach.

Down by four points with just over 10 minutes left in the fourth quarter, Vrabel chose to punt on 4th-and-2 from the opponent’s 40-yard-line. The Ravens took over and engineered a nearly six-minute drive that resulted in a field goal before intercepting Ryan Tannehill to put the game away. It was a questionable decision that not only went against the analytics, but went against history. He became the first coach to elect to kick in that scenario.

This is the first time in our database (complete back to 1994) that a team in the playoffs punted on 4th and 2 from this field position, down by one score in the 4th Quarter https://t.co/DNdUZL4fzw https://t.co/LLUp1yMUgt

When Vrabel was asked about the decision after the game, his response left a lot to be desired.

It’s a questionable call to begin with, but it becomes even more of a poor choice when you factor Tennessee’s running back into the equation. 6-foot-3, 247-pound Derrick Henry had a slow afternoon on Sunday but he still averaged 2.2 yards per carry. To gain the first down, the Titans only needed two.