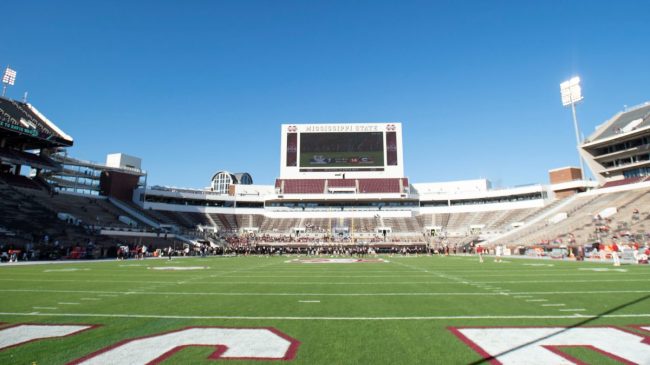 The Mississippi State football program is unveiling an interesting new premium seating option for fans. The area will bring the tailgate inside the game, meaning the party never has to stop.

In a release from the school, Mississippi State says that Davis Wade Stadium will now offer fans the option to purchase space at “The Balconies.”

MSU is set to put a section on both corners of the upper decks that will allow a premium opportunity for fans. Fans will be able to stand under a shaded area in their “box”, have access to electrical outlets and bring in certain items like tables and chairs, coolers and even a mini fridge.

It’ll be like you’re watching the game from your home but still have the excitement of being in the stadium. No more getting up to go to the concession lines. You can bring your coolers in, along with other select items.

MSU sees this as a way to get fans to attend games as opposed to watching from their couches. It seems to be getting some positive early reviews from fans.

Bulldog fans seem excited about the new additions. While it does cut down on the total number of tickets that can be sold, the areas will hopefully provide a unique, more enjoyable experience at the game.

Honestly I don't hate the idea. little tailgating areas inside the stadium where you can still see the game. with attendance dropping this is a good way to get the most out of the people that want to go to games without sacrificing the 'at home' experience

Stadiums are going to become more social/interactive settings in the future. It’s great to see State leading the way.

so at first i questioned it but now i kind of get it – the ability to bring in your own cooler/ mini-fridge to make this line a mini-suite *might* be a game changer https://t.co/RzVRDzYP7J

looks relatively similar to what the Guardians & Rockies did with their stadiums in MLB. had wondered in passing when that trend might make it to other sports stadiums https://t.co/W7MBhEnAfF

Some are comparing it to Mississippi State’s Dudy Noble Field, where fans can actually grill out in the outfield lounges.

Of course, there are still skeptics. Many question whether folks will want to purchase outdoor standing room sections in the upper deck. Especially for hot days in Mississippi.

We’ll see how it works out for the Bulldogs, and if others follow suit.