Research Finds Dak Prescott Is The Most Cost-Effective QB In The NFL, Tom Brady The Most Overvalued? 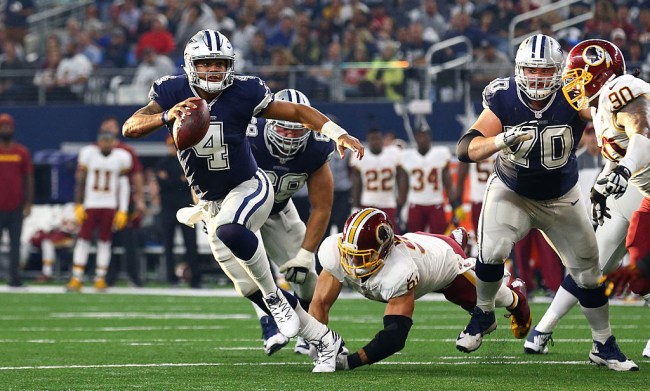 The astronomical salaries of sports stars across the world is constantly under the scrutiny of fans and the media, and none more so than the National Football League. The money that sports like the NFL bring in means that their players are inevitably paid huge sums for their service, but are these monumental salaries actually in sync with their performance?

New research by our friends over at PlayUSA has gleaned which NFL players give the most bang for their buck. To do this, PlayUSA compared the key stats for every NFL player with their income to find the most cost-effective players. From the amount Joe Flacco is paid per touchdown pass to the price of every sack DeMarcus Lawrence makes for the Cowboys, their interactive tool shows it all.

Their research also compiled each team’s statistics and salaries to determine how well the most and least frugal teams perform.

According to PlayUSA’s survey, Aaron Rodgers and Eli Manning were ranked most “unsung” and Tom Brady most “overvalued” by fans, but were they really?

• Dak Prescott threw for an 22 touchdowns in an otherwise unimpressive season for the Cowboys. His low salary gave him a score of $28,902 per touchdown.

• With a salary exceeding $20 million, the Packers’ Aaron Rodgers isn’t as undervalued as fans think, costing over $1.2 million per touchdown.

• That was nothing compared to Mike Glennon though, who cost the Chicago Bears a whopping $3.5 million per touchdown.

For the league’s running backs, they compared salary to both touchdowns and yards per game to find the most economical backs in the NFL.

• With an impressive 13 touchdowns and 45.5 yards on average per game, Alvin Kamara came out as the most cost efficient RB in the league, costing the Saints just over $54K per TD.

• With only two touchdowns all year, the Jaguars’ Chris Ivory ranked as the least cost-effective with a value of nearly $3 million per score.

Odell Beckham is now the highest paid wide-receiver…ever, but during the 2017 season which receiver gave teams the most value? (Hint: It wasn’t him.)

• New York Jets receiver Robby Anderson’s seven touchdowns at a cost of $77,619 per score made him the most cost-effective wide-receiver in the league.

• Tavon Austin may be fast as lightning, but it certainly didn’t pay off last season as he cost the Rams $15 million per touchdown scored (1).

• Considered by many as the best wide receiver in the league, Julio Jones had more yards than any receiver last season, but scored a mere three touchdowns at a cost of $4.6 million per score.

Fans often regard the likes of Rob Gronkowski and Greg Olsen as the league’s best tight ends, but who actually offers the best return on investment?

• Bengals tight end Tyler Kroft scored seven times last season, and with a modest salary he ranks as the most cost-effective TE at just $114,277 per TD.

• The Bucs Cameron Brate was only a hair behind Kroft for tight end value at just $115K per score.

• Meanwhile, Jimmy Graham’s 10 touchdowns last year for the Seahawks gave him a cost-per-score ratio of $1 million.

• As for Olsen, one touchdown, $12.1 million salary, and a season cut short by injury.

Defense will almost always be considered as the true unsung heroes of the sport, but who’s cheap salary and high performance has gone under the radar?

• Cleveland Browns linebacker James Burgess cost his team less than any other, with a cost-per-tackle score of $10,568 for the season.

• Za’Darius Smith of the Ravens falls on the other end of the spectrum cost-wise, with a price tag of $1.47 million per tackle in 2017.

Much of the work by defensive backs goes unseen, but these are the players that do their utmost to earn their keep.

• Kevin Byard of the Tennessee Titans outperforms everyone in the strong safety rankings, with the most interceptions (8) and the lowest cost per action score: $105,354.

• Los Angeles Chargers free safety Tre Boston made 56 tackles and grabbed five interceptions last year, making him one of the most cost-effective defensive players in the ranks.

• The Chiefs’ Terrance Mitchell was the best value at cornerback when it came to interceptions, as his four picks cost Kansas City just $172,500 each.

• The most expensive DB overall? Devin McCourty of the Patriots who raked in $10.9 million per interception last season.

Defensive ends and tackles are typically some of the biggest and strongest men in the sport, but who among them pulls their weight in terms of performance?

• Jaguars defensive end Yannick Ngakoue made 12 sacks and 24 tackles putting him in top spot for return on investment in the defensive line.

• Chris Baker of the Buccaneers was no bargain in 2017, costing Tampa Bay $12 million per sack last year.

If any aspect of the game is truly overlooked, it’s special teams. These positions can often win games, but at what cost?

• Ravens kick returner Alex Collins averages 27.4 yards on every return which, when compared against his salary, comes at the price of $18,549 per average yard.

• Harrison Butker of the Chiefs made 38 out of 42 field goal attempts last season and ranked as the most cost-effective kicker in the league.

Overall, the most cost-effective teams as a whole last season were…

While the least cost-effective NFL teams in 2017 were…

Check out PlayUSA’s fully interactive tool here to see the top, and bottom, five rankings at each position in 2017.