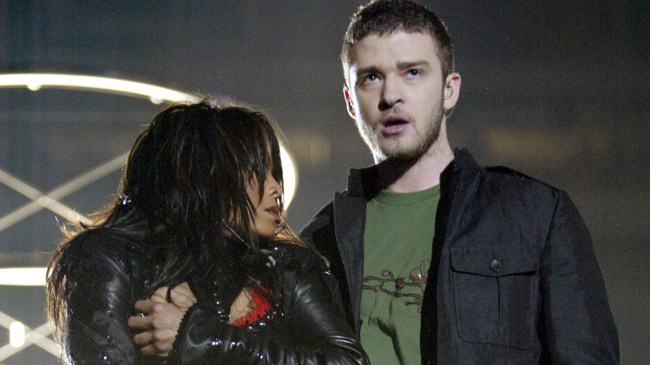 The Super Bowl is a time when the best of the best transcend their biggest hopes and dreams to achieve immortality… and others completely embarrass themselves and are forced to spend the rest of their lives in infamy. Either way.

Naturally, we’re here today to celebrate the embarrassments, mostly because it’s funny, but also because we should never forget. Yes, these embarrassments should serve as a cautionary tale for anyone who gets caught up in the madness of the Super Bowl. One day, you’re getting set to perform for the biggest audience of your life, the next your titty is on the front page of every newspaper in the world. It happens. Just ask the following, all of whom were responsible for the nine most embarrassing moments in Super Bowl history.

Look, I get it. It’s a hard song to sing and you’re up there in front of a billion people watching all across the world. That’s a lot of pressure. But damn it, Christina Aguilera is a professional and should be able to handle that shit. That’s why she’s up there and not some Make-A-Wish kid or that hobo with a golden voice who was popular for nine seconds a few years ago. Still, even they probably wouldn’t have let loose with a line like “What so proudly we watched at the twilight’s last reaming.”

What in the hell? “At the twilight’s last reaming?” What does she think was going on during the Revolutionary War? Apparently, according to Christina, we all gathered proudly as a nation to watch General Washington ream the fuck out of some poor redcoats behind the barn as the sun set on another day of ruthless sodomy. No wonder the British got the hell out. Still, I’m not sure the Super Bowl is the best place to commemorate that, Christina.

The day before Super Bowl XXXIII, the Falcons Eugene Robinson won the Bart Starr Award, given to the player who “best exemplifies outstanding character and leadership in the home.” Naturally, he decided to celebrate by going out and getting a hooker.

Of course, Robinson ended up getting busted by an undercover cop because that’s just how the universe works. Hilariously, the Falcons still made him play the game even though he had been up all night getting booked and he was torched for an 80-yard touchdown pass after busting his coverage and basically fucked up all game long.

Still, it could have been worse for Eugene. It was Miami, so he was probably just lucky he tried to pick up a cop instead of a hooker with a hidden penis who would have ended up selling his kidneys to a Cuban drug lord. See? Who says a life of “outstanding character and leadership” doesn’t pay off?

Garo Yepremian was just a tiny little weird dude from Cyprus. Naturally, he was the Dolphins kicker. He was pretty good too, but the only thing anyone will ever remember him for was his epic embarrassment during Super Bowl VII.

With his Dolphins leading the Redskins 14-0, Garo was sent on to attempt a field goal. The kick was blocked, which… big deal, those things happen, right? But Garo wasn’t about to go out like that. Hell no. The 5’7” Yepremian picked up the ball and tried to throw it after suffering delusions of grandeur. Or a stroke. Either way. Of course, the ball ended up slipping out of his tiny hands, and the Redskins picked it up and brought it back for a touchdown, which made the poor dude look like the biggest nerd in gym class in front of the biggest audience in the world. Welcome to America!

But what really made this embarrassing is that it happened to Peyton Manning, who has spent seemingly his entire career fighting off the whole “Manning Face” thing, largely because of his reputation for eating shit in epic fashion during big games. And here he was, in the biggest of games, eyes wide with panic and fear and “Oh shit, this is not happening!” while the ball sailed past him into the end zone. It was the summation of every choke-job, every embarrassment, every negative stereotype people had of Peyton Manning, and it happened for the entire world to see in HD slo-mo over, and over, and over again.

Prior to the Super Bowl, the Bills Thurman Thomas spent all week bitching because no one gave him the credit he deserved as one of the best running backs in the league. And so, like the champion warrior that he was, he rose to the occasion by… losing his helmet, which forced him to have to sit out the Bills first series, and then rushing for a pathetic 13 yards on only 10 carries as the Bills lost the game.

Look, that is like telling a girl all the things you’re going to do to her and then dribbling all over her thigh 10 seconds in before crying and shuffling off to the bathroom alone. Now imagine if that all happened with the entire world watching. This was failure on an epic and hilarious level.

Poor Leon Lett. He was a great player, a dominant defensive lineman who helped the Cowboys win multiple Super Bowls. But the only thing anyone remembers him for is for being a massive fuck-up. It wasn’t the only time he screwed up (google “Leon Lett Thanksgiving” for more hilarity) on a giant stage, but his Super Bowl XXVII boner dwarfs everything else.

Towards the end of the Cowboys blowout of the Bills, Lett picked up a fumble and, with no one in front of him, ran it back for a touchdown. But wait! Naturally, big Leon decided to showboat by dancing his way towards glory, holding the ball out for everyone to see… including the Bills Don Beebe. Beebe tracked Lett down and knocked the ball out of his outstretched hands and through the end-zone, robbing Lett of his glorious touchdown and giving the ball back to the Bills. Oops!

Describing it can’t really do it justice though. For maximum hilarity, just watch it here. That is the sort of thing you can never live down. They will engrave that scene on the dude’s tombstone, like one of those medieval tapestries depicting famous historical events.

This is just sad. During the potential game winning drive in Super Bowl XXXIX, Eagles QB Donovan McNabb rose to the occasion, and proved himself a champion by… puking all over the field.

McNabb vehemently denies that it ever happened, but the dudes’ own teammates have backed the puking story up, so… yeah. It’s not just that he vomited all over the place during the biggest moment of his life, it’s that it totally reinforced the prevailing sentiment that McNabb wasn’t a clutch player. Tom Brady throws touchdown passes, McNabb just throws up. Fair or not, that’s what this told everyone once and for all. What a legacy. I guess maybe he shouldn’t have eaten all that Campbell’s Chunky Soup his mama gave him after all.

This was just so New Orleans, right? I mean, come on, they couldn’t even get through a Super Bowl without the electricity going out. It’s like Bourbon Street invaded the Super Bowl. Of course, the NFL also looked like idiots for not making sure that they had a way to deal with this beyond, “Well, let’s just sit in the dark for a while and maybe show some more of those farting horse commercials. People seem to love those.”

The game ended up being suspended for 34 minutes while everyone frantically tried to restore power and everyone at home sat around and made shitty jokes on Twitter. Truly, it was an embarrassing and shameful time for everyone.

Yes, this is the big dog of embarrassing Super Bowl moments. One minute, Justin Timberlake and Janet Jackson were performing together, the next Justin was yanking on Janet’s top and her titty was popping out to say “How do you do?” to a worldwide audience.

Look, you can argue about whether this was intentional or not, but none of that really matters when your booby is hanging out for all the world to see. It was a moment that transcended the game, that transcended even pop culture and ushered in a new era of uptight church ladies quivering and quavering about the poor children.

Janet Jackson’s never been the same since. She’s just become “the titty lady” in our collective consciousness, which is amazing given that she was pretty much a pop megastar, and oh yeah, her brother is Michael fucking Jackson. It says something about us that one simple titty could cause so much craziness, but what’s most amazing about all this is that Justin Timberlake popped out a lady’s boob on live TV, just ripped open her shirt like some fucking savage, and no one gave him any shit at all. If that happened today, he’d be publicly tried and then crucified right on Twitter.

This was maybe the most ridiculous thing ever to happen in pop culture and so, of course, it is the most embarrassing moment in Super Bowl history.