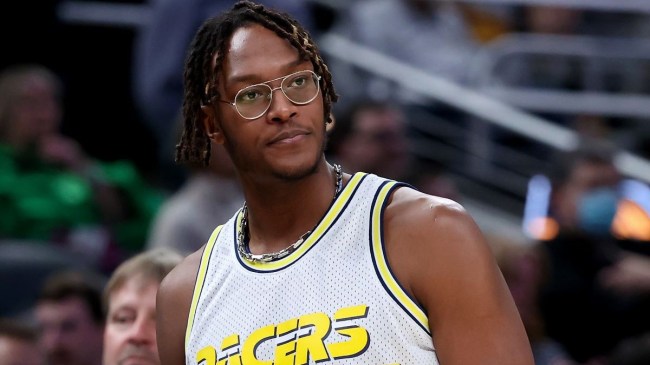 It’s not exactly breaking news that the Los Angeles Lakers are trying to turn Russell Westbrook into an actually useful NBA player.

The Lakers have been trying to trade Westbrook for the better part of the last four months. One of the big names that came up in trade talks was Indiana Pacers big man Myles Turner. The Lakers reportedly turned down the opportunity to trade Westbrook and a pair of first-round NBA Draft picks for Turner and teammate Buddy Hield.

After an absolutely horrendous start to the 2022-23 season that saw Westbrook moved to the bench, Turner’s name is yet again popping up as a possible option for the Lakers. This time, it appears he’s doing everything he can to will a move into reality.

Turner was recently a guest on “The Woj Pod” with ESPN’s Adrian Wojnarowski. Wojnarowski didn’t shy away from the trade topic. Instead, he downright asked Turner if he would make the trade if he were the Lakers. The answer was must-listen.

Should the Lakers give up the two picks? Full audio of Pacers center Myles Turner on The Woj Pod: https://t.co/yP00bwvnMZ pic.twitter.com/GZvSg9BLyp

“That’s such an intriguing question,” Turner begins. “…I think, personally, when you look at this business of the league and, you know, knowing the landscape of the league, you know, you have to go off your future, right? We all know picks are so valuable in this league. And, someone like myself, I’m heading into the last year of my deal. And you wanna make sure you’re getting a return for your assets, right? So, if I’m the Lakers I take a very hard look at this with the position that you’re in. I know what I can provide for a team.”

Turner also told Mike Scotto of Hoops Hype that he believes this is the year that he breaks out. The 26-year-old is in the final season of a four-year, $80 million deal and it’s clear he would love to play out that final year in LA.