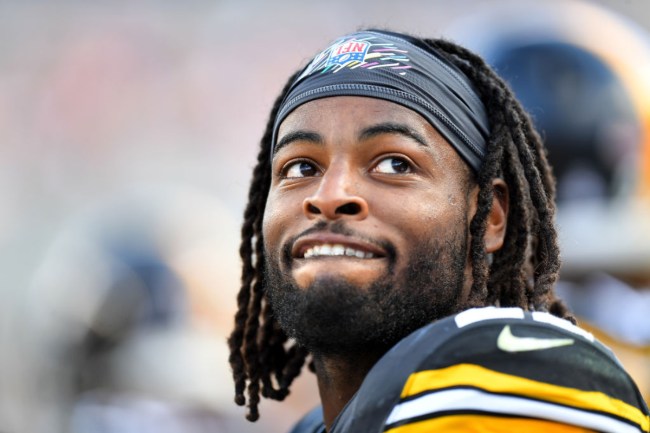 It’s always a bit of a shock to the system when there is a tie in the NFL. It doesn’t seem right that games just simply end after one quarter of overtime is played, but that’s the NFL for you, and it’s exactly what we got with the Steelers and Lion on Sunday.

Pittsburgh and Detroit played to a 16-16 tie, which was a complete surprise to Steelers running back Najee Harris seeing as how he had no idea that you could tie in the NFL.

“I didn’t even know you could tie in the NFL,” Harris said, according to ESPN. “In my mind, I was sitting on the bench saying, ‘I’ve got another quarter to go.’ But someone came to me and said, ‘That’s it.’ I’ve never had a tie in my life before.”

Harris isn’t the first NFL player to admit he didn’t know ties existed in the league. Donovan McNabb admitted the exact same thing back in 2008.

You can look at Harris’ admission two different ways.

On the one hand, he is a rookie, plus, Sunday’s tie marked just the 10th in league history since 2009.

Ties are rare, to say the least, but we’re talking about first-round draft pick and two-time national champion here, it’s safe to say he’s kept up with the NFL over the years.

Most fans on social media aren’t giving him the benefit of the doubt and are shocked to find out that an active NFL player didn’t know games could end in a tie.

I’ll never understand how players don’t understand the rules of the game that they are playing https://t.co/Qlloth3eF9

The frequency in which NFL players admit to not knowing the OT rules is mind boggling to me. https://t.co/3VlEwFDGbr

I can’t believe players continue to say this. Stop it. https://t.co/7P2CHoEPQ0

Honestly this annoys me more than ties themselves. Every time a game ends in a tie, a player isn’t aware they exist. Did you not grow up watching the NFL bro? This is the fourth straight season where a game ended in a tie. https://t.co/qgpuSGrIwv