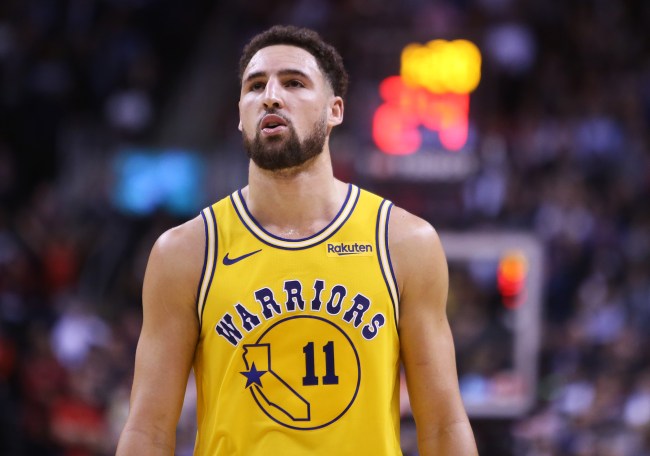 The NBA Finals start this week and pits the Toronto Raptors against the two-time defending champion Golden State Warriors. And, while the Dubs come in as heavy favorites to pull off a three-peat — which would be their fourth championship in five years — a few NBA fans are hoping that the Raptors’ grit can somehow dethrone the champs. Let’s face it, Golden State winning all the time can be a little boring, right?

There are a few storylines heading into the NBA Finals that add some drama. Will this be the last championship run for this Warriors team, which could end their dynsaty? Can the Raptors really compete? Are Kawhi Leonard and Kevin Durant gone this summer? Those are great and all, but how about this: Klay Thompson predicted this matchup back in November, which is impressive AF — and something worth talking about, too, right?

Back in November, Klay Thompson was asked what he made of the Toronto Raptors and their chances of winning the Eastern Conference following the trade that brought Leonard north of the boarder. Klay does the typical PC shout-out, then called the Raptors a “great test” for the Warriors, adding, “Who knows? It might be a preview of June, but they’ve got something pretty special up there in Canada.” Take a look at the video below.

Klay knew all the way back in November. 👀

Not sure if Klay Thompson has a crystal ball or something, but, damn, it’s pretty cool that he predicted the NBA Finals matchup nearly eight months before it actually came to fruition. The dude has a boatload of money already — and is about to cash in big with a new contract this summer — but maybe he should consider playing the lottery, because he was spot on here.

Who knows what’s going to happen in the NBA Finals, but here’s to hoping it’s more competitive than the past two years, when the Warriors are a combined 8-1. With the status of the injured Kevin Durant and DeMarcus Cousins unknown, maybe we finally get an entertaining series.