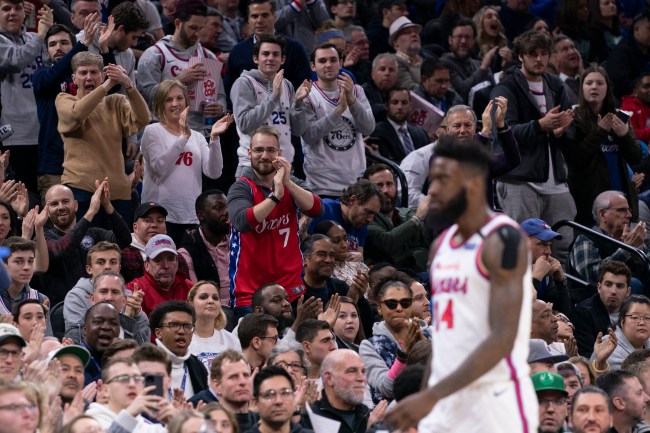 As the NBA season gets set to restart on July 31, which is dope AF, the league has lots of things to get in order before teams jet down to Orlando for training camp. Obviously, the main concern is keeping everyone healthy, with the league having protocols in place should any team’s staff member unfortunately test positive for COVID-19. But there are plenty of other things on the to-do list as well.

One of them happens to be how to make games entertaining for fans to watch on TV without feeling like it’s a rec league game at the local YMCA. That may not be the top priority, but, rest assured, given the fact LeBron James previously talked about the impact fans have on players during games, before the NBA season re-tips, the league will explore any and all options to add some energy into the empty arena.

Since fans won’t be in attendance, Shams Charania of The Athletic reported on Friday that the NBA is looking at one unique, albeit weird, option: pumping sounds from the video game NBA 2K through speakers for players and fans watching to experience some sort of reactions during games. Here’s what Charania tweeted earlier about the possibility.

Details at @TheAthleticNBA on the NBPA’s call with its Board and Player Reps: https://t.co/OiSdQosgvU

As mentioned above, the NBA season has lots of things to consider prior to getting the league going again, with the most critical emphasis being on the safety of players, coaches and staff. But it’s hard to ignore that whole NBA 2K suggestion that the league’s looking at, because it’s so insane that it might just actually be worth trying.

Naturally, once Shams Charania tweeted what he did about the possibility of NBA 2K sounds being used, people on Twitter had plenty of mixed reactions; so take a look below at some of them.

do not add 2K sounds, holy smokes. that would ruin the experience.

Screen about to shake when Bron shooting free throws

2K crowd noises gonna be 5 seconds late to every play 😂

Look, nobody wants the NBA to become too gimmicky — which is why the approved 22-team plan with the play-in option for the final seed in each conference was smart; because it wasn’t over-the-top or an extreme plea to get fans to watch. And while pumping video game sounds through arena speakers seems tacky, why not give it a try for a game or two after the NBA season returns to see how players react to it. Who knows? Maybe it’s something they actually enjoy more than silence.