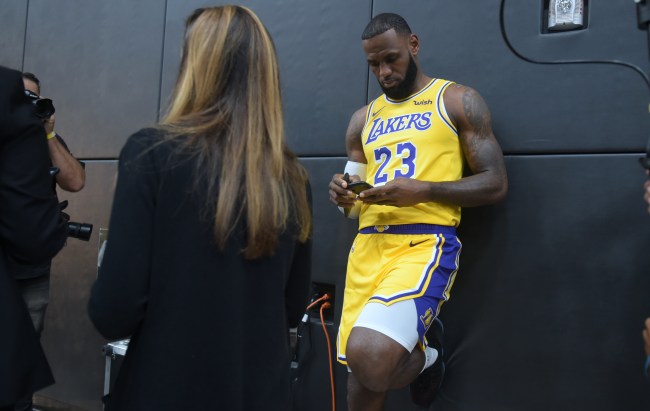 The NBA snitch line is actually a pretty interesting tool for players to use. While the whole idea kind of got laughed at when it became known that it would be available inside the bubble, when you see how well the league has done in keeping players, coaches and media members safe since the restart, it makes sense that the league wants to ensure people stay safe and, more importantly, don’t disobey rules and bring coronavirus onto the secured campus.

While we’ve heard some stories about how guys are using the NBA snitch line over the past few weeks, a new report from Yahoo! Sports‘ Chris Haynes paints a little bit of a different picture, with the writer suggesting that a few players are just texting league commissioner Adam Silver instead to rat other guys out. Talk about going straight to the top, huh?

Haynes first reported the news during Thursday’s Clippers-Mavericks game, sharing the details on live TV about what he’s heard inside the bubble.

My report on how some players are bypassing the anonymous tip hotline and going straight to the top with their complaints in the bubble. pic.twitter.com/JLMzLulpa0

“Much has been said about the anonymous tip hotline intended for players and staff to report violations inside the bubble. But what I found out was that players have been circumventing that process. Multiple players are personally calling Commissioner Adam Silver to issue their complaints about things they’re seeing in the bubble,” Haynes revealed during the third quarter of the Clippers-Mavericks game on Thursday.

This is pretty hilarious, and, while Haynes didn’t report which players may be doing this, one would imagine it’s the guys with the most star power who have that kind of direct access to Silver. That’s obviously just speculation, but, c’mon, you can’t tell me NBAPA President Chris Paul (a known winer) isn’t one of the players doing this, or that his good buddy, LeBron James, isn’t just waiting to text the Commish about which players are breaking quarantine.

Considering the punishments that can occur if a player does break quarantine and is reported to either the NBA snitch line or Silver, it makes sense that some guys have their eyes peeled for those who might be violating rules.

Leave it to NBA players to find a loophole in this whole snitch line idea, going directly to the long arm of the law rather than some middle person who just files a report. Hey, if it helps a team get an advantage, all is fair.