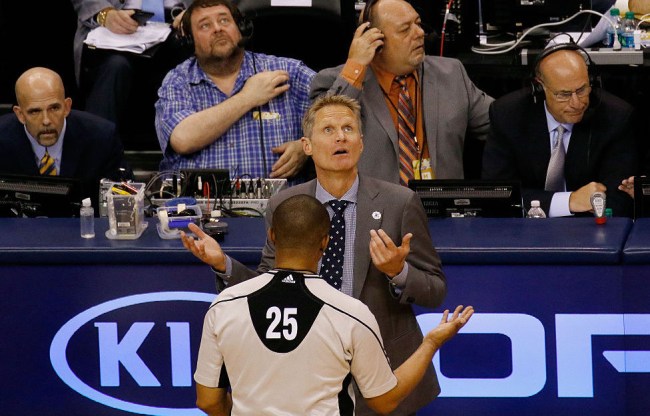 This season, NBA players and coaches got along with the league’s referees about as well as someone who runs into their ex at a wedding and is forced to bite their tongue unless they want a drink thrown in their face in the form of a $10,000 fine. At least they don’t have to worry about dry cleaning.

The NBA’s questionable officiating reared its ugly head in the first game of the Finals last week after a review led to the refs overturning a crucial call that resulted in a vintage J.R. Smith moment and an eventual Warriors victory in overtime. Despite the best efforts of Tristan Thompson, the Cavaliers can’t blame officiating for last night’s blowout loss, but that doesn’t mean they don’t have some legitimate gripes about some very questionable calls over the course of the game.

Thankfully, there might be some hope on the horizon, as it appears the NBA is gearing up to follow in the footsteps of the NFL and test out their own version of a challenge flag ahead of next season.

Just spoke with Kiki Vandeweghe… He said the NBA will experiment with a challenge flag during Summer League.

There are currently a number of plays that are reviewable, but referees are currently the only people capable of summoning the video monitor. There aren’t any specifics concerning which kind of calls will be challenged, but I’m sure the NBA will do everything they can to appease traditionalists and people who use the words “pace of play” more than any normal person should.

It’s also unclear if there will literally be a challenge flag, but if that is indeed the case, I hope the NBA makes sure any design they select can also double as a fashionable pocket square.