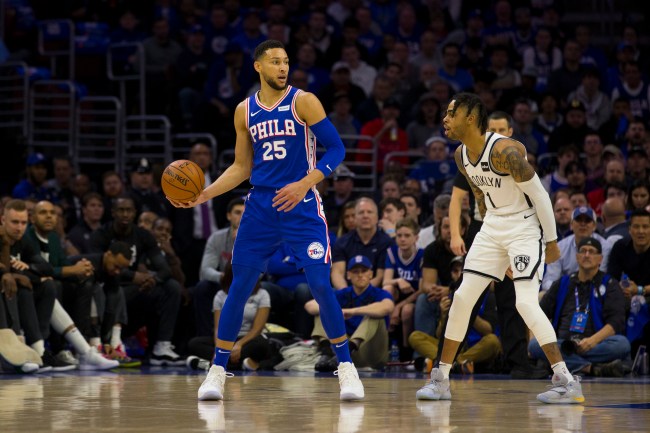 The NBA Trade Deadline is approaching fast, meaning it’s silly season when it comes to rumored swaps for teams to upgrade their rosters for a playoff run. While most of the rumors center around solid players being moved from bad teams to good teams — like the Cavs’ Kevin Love, seemingly, linked to every potential playoff team — there’s one rumor that would send shockwaves to the entire league.

That would be the report of a Ben Simmons–D’Angelo Russell swap, where the top pick in the 2016 NBA Draft (who’s just 23), could be traded for the No. 2 overall pick from the 2015 NBA Draft (who’s also just 23). Rarely do we see young superstars and All-Stars being traded like this for one another — especially during the NBA Trade Deadline — yet this rumor has some serious validity, according to The Athletic‘s Marcus Thompson II. Here’s what Thompson wrote he’s hearing.

One of the interesting possibilities I’ve heard being kicked around is Russell for Philadelphia’s Ben Simmons. The 76ers could use a point guard who can score and run the show — and shoot. Some believe the pairing of Simmons and big man Joel Embiid isn’t viable in their pursuit of a championship. Simmons, as one source told me, is probably the best player the Warriors could possibly get for Russell, just considering the needs of the Warriors and their potential trade partners.

It seems wild to think that the Philadelphia 76ers would entertain trading a cornerstone of the franchise, Ben Simmons, but given his well-documented struggles shooting the ball, the rumor does make sense. Add in the fact that the point guard and teammate Joel Embiid seem like a bad fit, and this is one NBA Trade Deadline rumor that might have some serious legs.

As for the Golden State Warriors and D’Angelo Russell — who was acquired just last offseason in a sign-and-trade from the Brooklyn Nets for Kevin Durant — he was supposed to ease the pain from losing a two-time NBA Finals MVP, and help represent a new beginning for the Warriors as they looked to reshape the roster with Stephen Curry and Draymond Green as Klay Thompson recovered from a torn ACL. Unfortunately, Curry got hurt, and the Warriors have the worst record in the league, so Golden State now seems to be looking at other options.

While the NBA Trade Deadline brings lots of wild and crazy rumors, a Simmons-Russell swap would make sense both in the short- and long-term for both the Sixers and Warriors, with Philly getting the shooting and ball-handling it needs to make a run this year, and Golden State getting a guy who can control the offense and rack up assists all night long once Curry and Thompson are fully healthy and back on the hardwood. Guess we’ll have to see if this comes to fruition in the coming weeks.