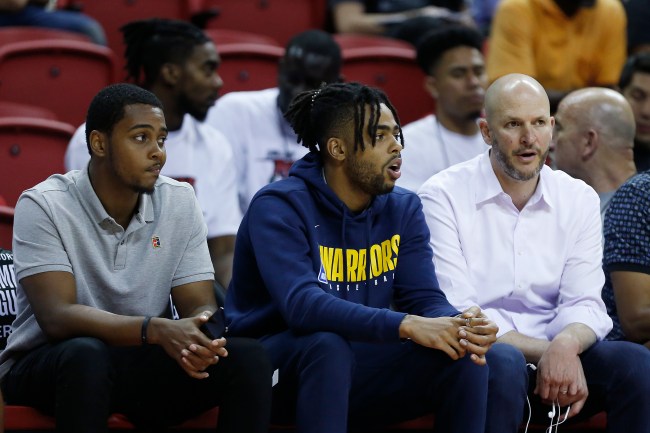 The Golden State Warriors might be coming off five-straight seasons of reaching the NBA Finals, but, as we’ve seen since the team lost to the Toronto Raptors, the roster looks a little bit different. The most obvious subtraction is two-time NBA Finals MVP Kevin Durant, who ended up being dealt in a sign-and-trade with the Brooklyn Nets, with the Warriors ending up with point guard D’Angelo Russell — which is a huge addition considering the 23-year-old was an All-Star last season.

Although Russell isn’t Durant, the fact that Klay Thompson’s expected to be out most, if not all, of next season while rehabbing a torn ACL he suffered in the NBA Finals gives the Golden State Warriors a talented backcourt mate with Stephen Curry. But what happens when Thompson returns? That’s anyone’s guess, with some rumors even floating around that Golden State has “no interest” in D’Angelo Russell, and might consider shopping him around while his value’s as high as it is.

Don’t be so quick to believe that, though, because, according to an anonymous NBA executive, the thought that the Warriors would get rid of Russell is the “stupidest thing” he’s ever heard. That’s what Keith Smith of RealGM was told.

“I’m trying to be nice, but that is the stupidest thing I’ve ever heard. A 23-year-old All-Star on a four-year deal better be someone you can trade easily, or we’re all idiots. Did we sign D’Angelo to trade him? No. We signed him because we had an opportunity to land an All-Star to replace the All-Star we were losing. Let’s not play conspiracy theory here.”

While everyone thinks that the domination of the Golden State Warriors is all but over now, adding a guy like Russell to pair with Curry is a nice consolation prize for losing Durant. Could the team swap him for depth? Obviously. Does the team really need him knowing that Thompson will be back at some point? Not necessarily. But if there’s any team that can make a small ball lineup of Russell, Curry, Thompson and Draymond Green work, it’s the Warriors. Plus, that’s still four All-Stars, so don’t expect Golden State to just fade into oblivion next season.

Everyone wants to write off the Golden State Warriors and pronounce them dead given all the turnover in the league this crazy offseason. It’d be dumb to do so, and, if the team does keep D’Angelo Russell — which seems to be the plan for now — who knows just how dangerous the new look roster can be.