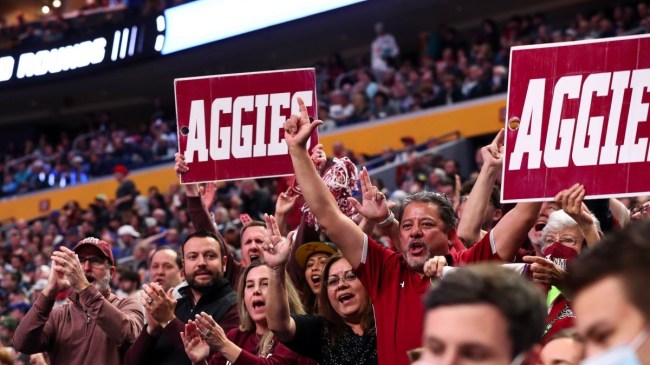 Travis points a gun at Peake’s head before another assailant hits him with a baseball bat. Peake shoots Travis while fleeing.pic.twitter.com/TtRb1ZfQH5

According to the New York Post, Peake was lured into an ambush attempt by New Mexico students. He had previously been involved in an altercation when the two rival schools met for a football game in October.

Peake got into a brawl involving students from in-state rival University of New Mexico when the two schools played each other in football in October. When New Mexico State traveled to New Mexico for a basketball game that was scheduled for Nov. 19, Peake was lured into what he believed would be a sexual encounter by a 17-year-old girl and was ambushed by three men in apparent retaliation for the fight at the football game.

The video shows Peake being attacked by a man with a baseball bat and as he ran away he became embroiled in a shootout with the assailants. Peake was shot in the leg and sustained injuries that has required multiple surgeries. In the crossfire, he shot and killed 19-year-old Brandon Travis. – via the New York Post

Peake, a junior, began his college career at Georgia. He then transferred to Austin Peay for a year before ending up at NMSU.

The 6-foot-8 forward averaged 4.1 points and 2.4 rebounds off the bench a year ago. But this year he was a starter for the Aggies. Peake started each of the first two games of the season. He scored 9.0 points per game and pulled down 3.5 rebounds.

He’s since been suspended indefinitely pending an investigation into the incident. Though police have not charged the Chicago native with any crime at this point. Peake was described as the victim in the initial police report.

New Mexico State has also hired a private investigator to review the incident.

“We will be incredibly transparent during this process. We owe that to our community and to everyone associated with our university. The firm selected will be encouraged to review public documents regarding this case and be fully empowered to speak with any NMSU employees, students or other individuals necessary to ensure we fully understand the facts.” – New Mexico State chancellor Dan Arvizu

The Aggies are 4-3 on the young season. New Mexico State canceled the previously scheduled game against New Mexico that had been set for the day following the incident.