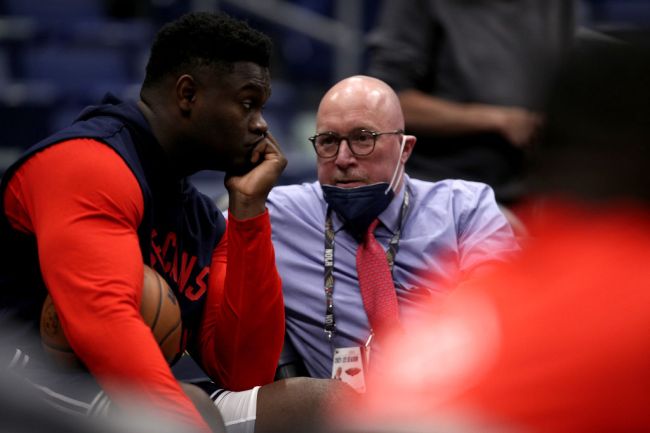 Zion Williamson’s NBA career has come under a lot of scrutiny lately. His injury issues have limited him to just 85 games so far in his career. Recent reports have indicated that we might not see him any time soon.

Meanwhile the man who was selected with the pick after Zion, Ja Morant, has led the Grizzlies to one of the NBA’s best records. It has created some comparisons to Greg Oden and has many questioning just how bad the Zion pick was for the Pelicans.

Now, we’re getting reports from current and former teammates that paint a not so flattering picture of Zion as a teammate.

As all of these factors have come together, there has also been some speculation about whether or not Zion will suit up again as a New Orleans Pelicans. Today, the Pelicans sent an email that added fuel to this speculation.

The #WBD #Pelicans just sent email to season ticket holders about renewals for 2022-23 season and…
NO MENTION OF ZION 😳 pic.twitter.com/Qqu9kibRWk

You’d think that if Zion Williamson was still the cornerstone of your franchise that you spent a number 1 overall pick for him to be, he’d be at least mentioned in your season ticket email for next season.

It’s not like they’re advertising for games this season where they have absolutely no clue if Zion will be available. They have to be expecting Zion will be ready by the start of next season after missing all of this year so far.

If the New Orleans Pelicans actually do try to trade Zion, it would be really interesting to see what they’d be expecting in return and what they’d actually get. What exactly is the value of a former number 1 pick who is 3 years into his career, has played well when healthy, but will have missed nearly 2/3 of his first 3 seasons?

It would be one of the more difficult trades to predict in recent years, but it would make for an interesting story for the NBA’s next offseason. Maybe this summer will see the Pelicans change course on their Zion pick.