No Joke, Neymar Could Be Suspended For Champions League Final After He Swapped Jerseys With Opponent 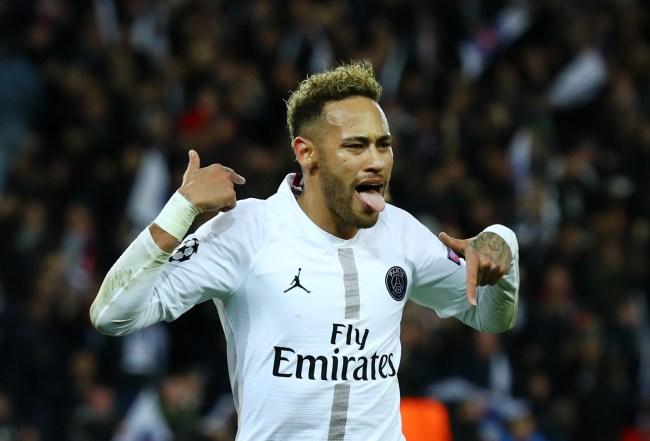 Neymar is one of the best soccer players on the planet, and has helped guide his Paris Saint-Germain squad to their first ever Champions League Final after defeating RB Leipzig 3-0 in their semifinal match on Tuesday. While it’s an exciting time for the club and the 28-year-old Brazilian star, well, not all was good news following the monumental victory.

That’s because, after earning the victory, Neymar was caught on video swapping jerseys with an opponent, Marcel Halstenberg. While that may not have been a big deal and was just common practice prior to 2020, because the entire year has sucked balls, the forward could find himself suspended by UEFA for his little act due to updated rules to help prevent the spread of COVID-19. Here’s the video of the swap, as well as info about a possible looming suspension.

According to reports before the competition's return from the Covid-19 shutdown, swapping shirts during the Lisbon mini-tournament would result in a 12-day period of self-isolation.

For fuck’s sake, could COVID be any bigger of a bitch? Seriously, if Neymar’s able to sweat for 90+ minutes on the pitch, spit, run, lock arms with opponents and be healthy enough to last the entire match, and then be punished for swapping his jersey, it’s proof that the world really is going to shit. I mean, what the hell?

Luckily, a few people on Twitter pointed out that the new UEFA rules regarding swapping jerseys has a small loophole in its language, with the word “recommended” possibly coming to the aide of Neymar in this case; as in, it’s recommended that players don’t practice the longstanding tradition.

To the people who think Neymar May be suspended for the #UCL final for shirt swapping, here is all the info!
It’s ONLY recommended not to do it.
Neymar jugará la final! https://t.co/KbEaYnk0E2

Considering those are the written rules in the UEFA statement, Neymar should be safe to play in the Champions League Final. But, who knows what actually happens, because he could still get fucked over by some stupid rule that was put in place a couple of months ago when his Paris Saint-Germain squad takes on either Bayern Munich or Lyon in the title match. If that actually happens, it’d be a really shitty way to miss one of the biggest matches of his career.