With The NFL Draft Being Held Virtually, One Team Exec Actually Fears Their Zoom Being Hacked 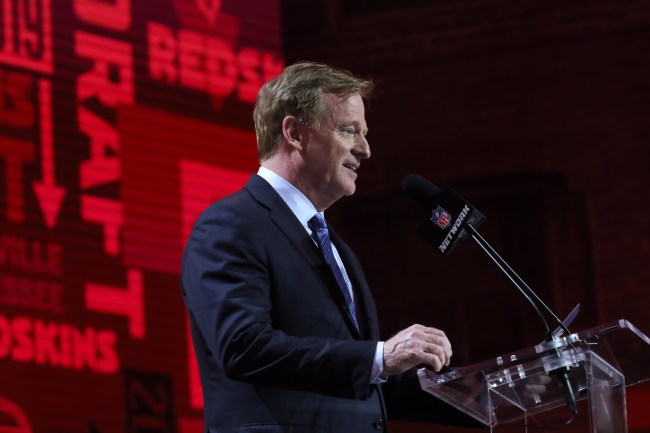 The NFL Draft is going to have a little bit of a different vibe in 2020, as the ongoing pandemic is pushing the usual live event to go virtual, with teams staying safe and selecting players from the comfort of their own homes. It’s kind of a unique thing, giving fans the opportunity to see head coaches and top execs communicate from their living rooms rather than all packed into a “war room” at the team’s facility.

NFL commissioner Roger Goodell just informed clubs in a memo that club facilities will remain closed indefinitely and the league will conduct a “fully virtual” draft, with club personnel separately located in their homes. pic.twitter.com/28t2kNnLAI

While these desperate times are calling for desperate measures in regards to the NFL Draft, that doesn’t mean that there aren’t some major concerns about how this is all going down. As we’ve seen with plenty of different things in our daily lives, coronavirus is redefining what’s “normal,” which is leading to some real questions when it comes to the draft this year.

Among the most critical is cyber security, with at least one NFL Exec — COO of the Los Angeles Rams, Kevin Demoff — voicing his serious concern about a team’s Zoom conversations being hacked. Talking to longtime NFL writer Peter King of NBC Sports, take a look at what Demoff had to say about the “unnerving” possibility.

“The security aspect, which is probably the most important for teams. How do you make sure your conversations are protected? Someone could hack into this Zoom, and you’re probably not going to learn a lot. Hacking into a team’s draft room on Zoom is probably a lot different. That would be my biggest concern just from an encryption standpoint of how do you have these conversations confidentially.”

As more people using Zoom to communicate (re: host happy hours with buddies or have first dates) during this whole social distancing thing, there’s been an uptick in the app being hacked. While some of the damage has been juvenile comedy at best, imagine being a top-level exec of an NFL team who’s forced to make a huge decision in the NFL Draft, and constantly be worrying about information being leaked or stolen. That’s a legitimate concern — at least from Kevin Demoff — and only further shows how messed up everything in the world is right now.

With the draft just a few weeks away (scheduled for April 23-25), everyone in the league is reportedly preparing for the process to be held from home, per ESPN’s Adam Schefter.

More on high-level officials from multiple NFL teams now preparing to conduct the April 23-25 draft virtually, from home, away from their team facilities:https://t.co/JPynxeuX56

So, just when the league thought it was doing the right thing by moving the NFL Draft to a virtual version to help combat any concerns over the outbreak that’s going on in society, teams now need to worry about jackasses who could hack into their systems to steal vital info about a player they’re interested in. What a weird time to be alive.