NFL Fans Were Stunned Lamar Jackson Wasn’t Even At The Ravens’ Game, Supporting His Teammates 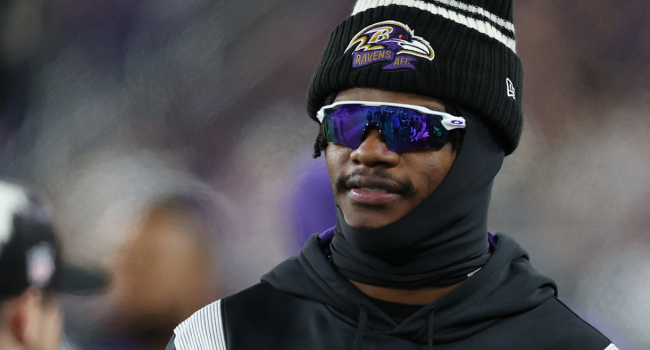 Baltimore fans (and some players) were very vocal in expressing their opinion that if Lamar Jackson had played on Sunday the Ravens would have won.

Lamar Jackson, unfortunately, missed his sixth straight game with a PCL sprain that was originally expected to sideline him for just one to three games.

Jackson suffered the knee injury against the Denver Broncos back in Week 13.

Last week, ESPN’s Adam Schefter gave Ravens fans a glimmer of hope when he reported there was a “strong chance” Jackson would play in the Wild Card game on Sunday.

However, this past Thursday, Jackson wrote on Twitter, “Thank you everyone for your support and concerns regarding my injuries. I want to give you all an update as I am in the recovery process. I’ve suffered a PCL grade 2 sprain on the borderline of a strain 3. There is still inflammation surrounding my knee and my knee remains unstable. I’m still in good spirits, as I continue with treatments on the road to recovery. I wish I could be out there with my guys more than anything but I can’t give a 100% of myself to my guys and fans I’m still hopeful we still have a chance.”

Baltimore head coach John Harbaugh claimed to have had no knowledge of Lamar Jackson’s tweet the next day.

#Ravens coach John Harbaugh on Lamar Jackson's tweet: "No, I didn't know anything about that and didn't pay much attention to." Also says he can't comment on the specifics of Jackson's injury.

On Sunday, with Tyler Huntley under center, the Ravens came close to winning, but blew a chance at the goal line which ended up deciding the game.

Many fans, in addition to being shocked at what happened on that play, as well as how poorly Baltimore managed the clock at the end of the game, were also stunned to find out that Lamar Jackson wasn’t even in the building.

Especially after Michael Vick trashed Jackson for not playing during the pre-game show on Fox.

Um, Lamar didn’t even travel with the team? 🧐

“Lamar Jackson has played his last snap as a Baltimore Raven,” one fan tweeted, echoing the opinion of many others.

One person who sided with Lamar Jackson after Michael Vick’s remarks was Robert Griffin III, who knows a thing or two about “putting a brace on it” and playing, as Vick suggested.

This is why you don’t just put a brace on it and play. Played with no ACL and LCL for my brothers/team. Changed the trajectory of my career. Hindsight is 20/20. I didn’t have the luxury of that. Lamar does. He is DOING THE RIGHT THING. pic.twitter.com/UPY5pKNOcH

RG3 definitely has a point, but that still doesn’t explain why Jackson wasn’t at least at the game to help Huntley and support his teammates.