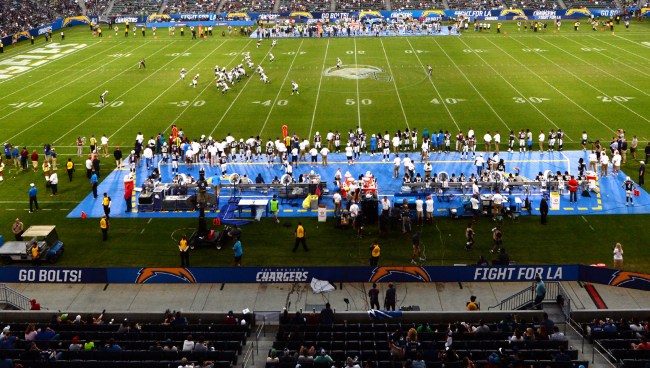 The Chargers move from San Diego to Los Angeles hasn’t exactly gone over very well with NFL fans. Sure, people in Los Angeles enjoy going to the games, they just go to Chargers games to root for whoever they’re playing.

The Chargers will be moving out of the “cozy” 27,000-seat Dignity Health Sports Park into a shiny new $5 billion SoFi Stadium they will be sharing with (and leasing from) the Los Angeles Rams in 2020.

However, considering just how poorly the Chargers have been received by football fans in Los Angeles, the NFL has reportedly had discussions about moving the team to London, according to Vincent Bonsignore of The Athletic.

It has been widely assumed that if an NFL team were to move to London it would be the Jacksonville Jaguars, owned by Shad Khan. Khan is also the owner of Fulham F.C. – an English Football League team based out of London.

Bonsignore says “NFL owners are concerned enough about the Chargers’ situation in L.A., where a crowded sports market and the presence of the more established Rams has resulted in a tepid embracement of the Chargers, that they would provide the necessary support for a relocation to London if the Chargers pursue it.”

He also points out that there is already an NFL-ready stadium in London, the new $ billion Tottenham Hotspur Stadium, and that the most recent NFL game held in the city had 83,000 people in attendance at Wembley Stadium.

It has also been reported that the NFL would prefer two new teams in London, which could mean the Jaguars will move there as well.

Mike Florio of Pro Football Talk speculates that the NFL may be using the Chargers as a way of getting Khan to make the move to London sooner rather than later.

As Daniel Levy, the chairman of Tottenham Hotspur told The Athletic, the day for an NFL team in London, be it the Chargers, Jaguars or some other team, is coming soon.

“We have created a new landmark in London, one that is truly global, and one that will stage the world’s two most popular sports, Premier League football and NFL, along with many other sports and world-class entertainment,” said Levy. “This partnership with the NFL has enabled us to push the boundaries of stadium design. It is something that has never been done before anywhere in the world.”