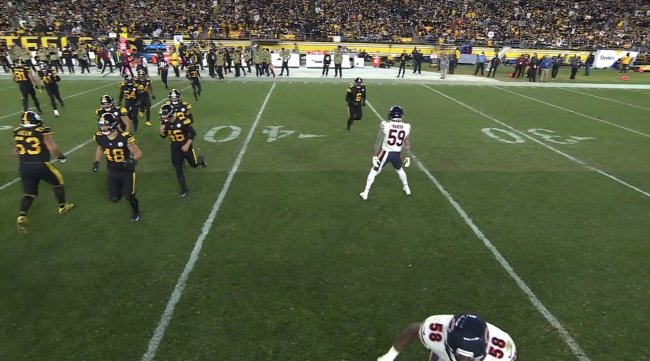 The NFL has rolled out NFL SVP of Officiating Perry Fewell to comment on the controversial taunting penalty called on Chicago Bears linebacker Cassius Marsh, and his statement is yet another reminder that the league has no clue what fans — and players — want from the sport. The flag was thrown on what would have been 4th-and-15 as the Steelers had their punting unit marching onto the field.

“In Chicago versus Pittsburgh, Bears number 59 (Cassius Marsh) is penalized for taunting. He takes several steps towards the Pittsburgh bench, posturing towards their sideline. Taunting is a point of emphasis to promote sportsmanship and respect for opponents. This was recommended by the competition committee and coaches,” Fewell says in a video posted to the league’s officiating Twitter account.

The statement from the league — in addition to sounding extremely propaganda-y — clearly proves they have zero clue what their audience actually enjoys about the game, as the reactions to the statement were unanimously negative.

Oh, he postured? Well then. That’s different. League apparently wants to bring its No Fun League moniker back. But hey, we’re addicts, so what are we going to do? Watch the other US pro football league that doesn’t exist? They’ve got a legal monopoly. We’re powerless.

To me it makes it worse when they do this shit and double down on horrible calls.

No fans want this penalty called. They're hurting the game. We like when there's shit talk and guys show emotion. We all.know when it crosses the line, but inless it's egregious keep the flag in your pocket and stop impacting the outcomes of games with stuff like this.

This only helps refs arbitrarily judge and alter games. This and the league being all in with betting is a terrible look

I bet Perry is fun at parties

They’re making it up as they go

So far, there have been 27 taunting penalties called this season. That’s the No Fun League for ya: not only are they trying to legislate the game, but the basic human emotions — excitement, pride, arrogance — that come with playing professional sports at the highest possible level. It’s absurd. The NBA changed the way they officiate games this year (not more of those jump-into-the-opponent-while-fake-shooting foul calls) and fans are absolutely loving it. The NFL should take notes.