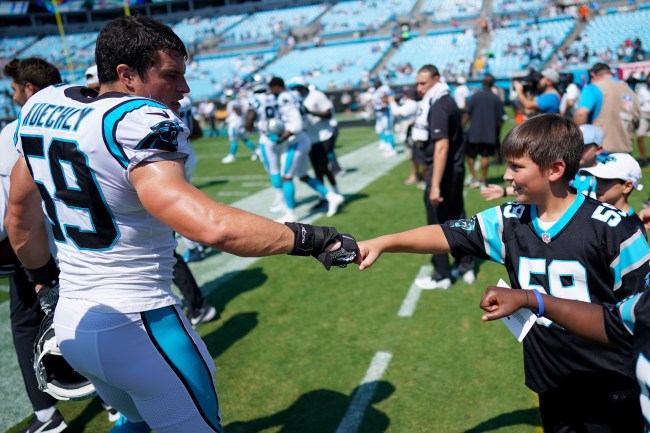 After eight years of being one of the most productive linebackers of his time, Panthers captain Luke Kuechly is hanging up his cleats at 28.

Kuechly’s resume is thicc: led the NFL in tackles as a rookie, won the Associated Press 2012 NFL Defensive Rookie of the Year award (third youngest recipient in history), seven Pro Bowl appearances, five first-team All-Pros, and the 2013 AP Defensive Player of the Year.

“In my heart, I know it’s the right thing to do.” pic.twitter.com/mSDyJ0iEMw

After writing out Kuechly’s accolades, it’s a surprising reminder of how scary good he was since being drafted by the Panthers ninth overall in the 2012 draft. He has been an absolute machine, and if he wasn’t so damn humble, maybe I’d be less surprised by the bullet points of his Hall of Fame career.

But outside of being a Catholic boy of simple pleasures, my knowledge of Luke Kuechly The Person is limited. I guess that is the byproduct of Kuechly having 150,000 Instagram followers and not posting a single photo.

Thankfully, former teammates, coaches, and opponents from around the league filled in the blanks. It seems that everyone who has put on an NFL uniform considers Kuechly to be one of the finest men to ever compete.

I have included tributes from several players, but I could keep at this all day.

Words can’t describe who Luke Kuechly is as a person, friend, and teammate. We have shared countless memories together both on the field and away from it. I feel honored to be his friend and I’ll always appreciate the impact he has had on my life. Love you buddy pic.twitter.com/0DHYkOwDp1

I had the privilege of playing next to HOF #MikeSingletary & coaching HOF @BUrlacher54 & @LukeKuechly is worthy of that honor someday. But more important I will remember Luke’s sense of humor, his leadership & 4 being a great teammate. pic.twitter.com/MM96l6vZSS

I couldn’t be more proud to call you my brother! Congrats on a heck of a career! The game will miss you as much as you miss the game bro! I love you my brother! https://t.co/6jw3C1xeZK

Thank you for some of the best memories both on and off the field. I’m so honored to have shared the field with not just the best player I’ve ever seen, but the best person I’ve ever met. Will always love you bro! To retirement🍻🎣@LukeKuechly

Luke was a fierce, intense competitor who loved his teammates and the game of football. A consummate pro who always believed in team first. He revolutionized the modern day standard for MLB's. It was honor to coach him. He is the best of men on and off the field. 🐐@LukeKuechly

Easily one of my favorite teammates and one of the top 3 best players that I’ve seen. Can’t wait to see what’s next for you! https://t.co/zrDa2mo2HU

One of the Best Teammates I’ve ever had! The 1st person you meet when you come into the locker room. Always told people I’d teach my son to be like you! You’re the model of The Standard! Future HOFer! Proud to call you one of the bros! One heck of a career! Love you bro! LUUUUKE! https://t.co/NcB3MQExMg

Luke kuechly is one of most pure and authentic people i’ve met! He was a great teammate and friend! honored to have played with you! The gridiron will miss your presence but I’m excited to see what the next chapter has for you! love you Bro! #KeepPounding pic.twitter.com/0a6k4urcRu

After playing with @PatrickWillis52 I didn’t think it was possible for me to touch the field with another LB of his caliber. Then I went to Carolina. Enjoy retirement @LukeKuechly!

Congrats @LukeKuechly on early retirement. You were a fearless player out there on the field. Soooo….when are you coming back??

Luke doesn’t even have social media he is that different. I have to see him soon in person and pay my respect always fun to play against. Meetings were always a little longer, and gameplans a little more complex. He kept you honest.

Much respect to one of the great LBs to play football. You’ve given so much to this game and were a special player to watch. The game is losing a great one. Nothing but respect ✊🏾 https://t.co/Ja76illgi5

Incredible player and person.
The game is going to miss you brother! https://t.co/UxKiTkww7S

One of the greatest players of our time! 🐐 @LukeKuechly Will never forget playing against you! Good luck in the future!! pic.twitter.com/OsCiFXHVPP