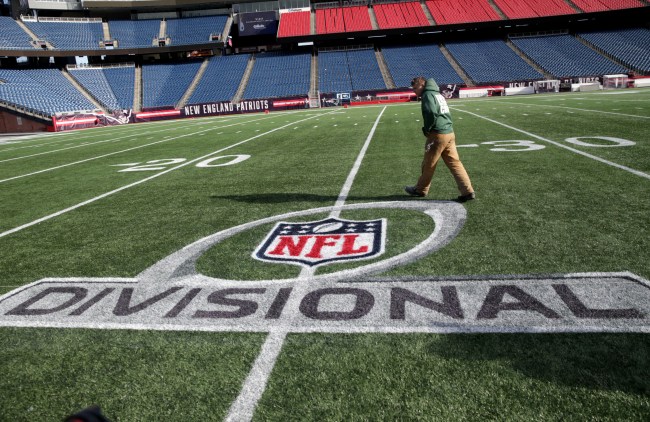 With the unraveling of the NFL season thanks to COVID-19 outbreaks on a variety of teams, namely the Tennessee Titans, the league has had to adapt on the fly to try and get in as many games as possible while still trying to maintain the safety of its players, coaches and team staffs. It’s proven to be trickier than they probably originally thought, seeing that the decision to eliminate or scale back fans in the stands wasn’t going to be enough.

Hell, in the past couple of days we’ve seen a former league MVP, Cam Newton, test positive for COVID. We saw one of his teammates, last year’s DPOY Stephon Gilmore, be positive and interact with Super Bowl MVP Patrick Mahomes. And we’ve seen the aforementioned Titans break league protocol and hold a secret practice at a Nashville high school following a ton of outbreaks over the past couple weeks — which forced the team’s Week 4 game against the Pittsburgh Steelers to be cancelled.

As the NFL tries to figure out what in the hell to do with the unprecedented season — with reports that even more games could be rescheduled, moved or, yep, even forfeited — ESPN’s Adam Schefter said the league is trying to do as best as it can to create a level playing field. Short of outright cancelling a team’s remaining season, Schefty said that the league is seriously considering adjustments to its current playoff format, saying participating teams may get into the postseason based off of winning percentage and not the amount of wins that the league typically goes off of.

Appearing on ESPN’s Get Up Thursday morning, here’s what Schefter had to say about what he’s hearing when it comes to the ongoing discussions around the NFL and the changes that could take place.

“The NFL has gone over a number of alternative scenarios, and in a season of COVID, it very well may be forced to resort to one of those. And one of those that has come up is that the playoffs won’t be based on a number of wins as it has been every year that the NFL has existed, it could just simply be that it’s based on win percentage. That if the Tennessee Titans go 10-3 this year, or whatever their record is, if their win percentage is better, they go to the playoffs.

“Again, it is not an ideal scenario, but we are not living in an ideal time where everything works out the way you’d like it to. And so, let’s see if they could play that game. Let’s see how it figures out. Let’s see if the NFL can collapse a week later on. Again, all options on the table, the NFL says. They’re going over all of them as we speak. And we’ll ultimately, we’ll see what they decide to do. But I think that in the end, with some of these positive tests, some of these facilities shutting down, some of these games being in jeopardy and we’re just now entering Week 5 tonight, it may well be that the league has no choice but to make the playoffs based on win percentage.”

This would be a wild adjustment for the NFL to do during the regular season, but, hey, desperate times call for desperate measures — and changing the playoff format would definitely qualify as that. But with the Titans realistically in trouble of playing less than 16 games in the regular season, the league may find that it’s necessary to try and adapt and survive. Then again, Titans players are the dumbasses who don’t seem to be taking this whole thing seriously, so why not punish them and keep them out of the NFL Playoffs altogether? That’s just my take; but who the hell am I?

As crazy as this idea sounds for the NFL to implement, it might be the best thing to do for one very simple reason: Because the NFC East is trash and doesn’t deserve a single playoff team. Seriously, imagine a “mighty” 6-win division winner not only reaching the postseason but hosting a playoff game. That’d be embarrassing AF for the league, especially when looking at other divisions (namely the NFC West) which has four teams all capable of making a deep playoff run.

Who knows if this proposed, updated playoff idea comes to fruition or not, but given the craziness of the NFL season to this point and the adjustments to the schedule that are bound to keep happening, it seems like a wise idea to at least be discussing. And, hey, it it means the best teams in the playoffs, more power to it.