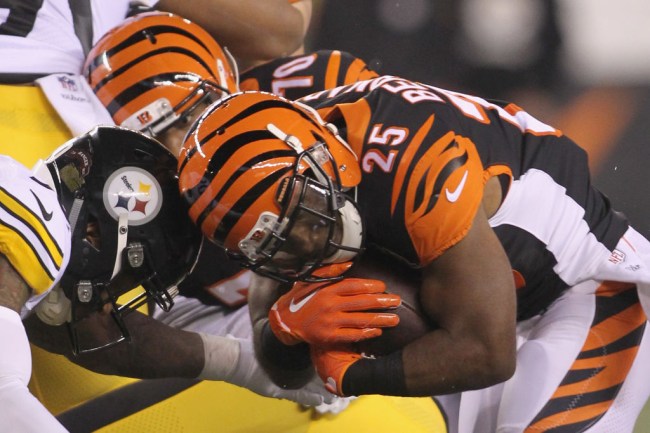 In an effort to make the game safer, The NFL approved a new college-style helmet-to-helmet targeting rule that will penalize players who lead with the crown of their helmets to initiate contact against an opponent. Offending players would be penalized 15 yards and may be sbject to ejection depending on the severity of the hit.

Yesterday, USA Today’s FTW wanted to see what a game from last season would look like if the new rules were in effect and the results are shocking.

So how will this affect the game? To get a sense, we reviewed the first-half of the Week 13 Steelers-Bengals game on Monday Night Football and tried to identify as many of these now-illegal hits as we could.

On 43 passes, we saw just 10 plays including at least one questionable hit. Six of those plays included at least one obvious penalty.
Defenders were twice as likely to commit these penalties. We counted 24 possible flags on defensive players compared to 13 for offensive players. The remaining two flags came on one kickoff return.

It’s clear that the game of football needs to change but I’m not sure if the NFL is ready for the amount of controversy these new rules are going to cause considering how terrible the college targeting rule is enforced.

Make sure to head on over to USA Today to read the rest of their analysis of how the NFL’s new targeting rules would affect next season’s games.