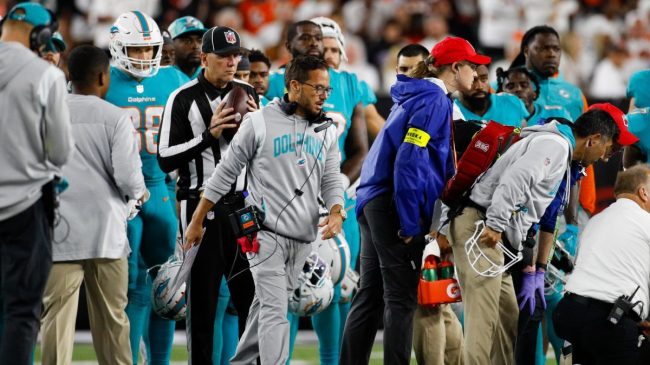 More than a week after the terrifying injury that forced Miami Dolphins QB Tua Tagovailoa to be stretchered off the field in Cincinnati and the NFL is still receiving criticism from every which way.

He returned to that game following the incident and led Miami to victory. But NFL evaluations state that he should not have been allowed back into the contest. Several NFL teams have also said that they would not have cleared Tagovailoa to play the following game against Cincinnati.

Therefore the NFL launched an investigation into the situation just days after Tagovailoa’s concussion. Now the league is making the results of that investigation public.

Most notably, the league and NFLPA stated that the prior protocols did not produce the intended results.

“The outcome in this case is not what was intended when the protocols were drafted,” the joint statement said.

The league is also implementing one major change to its concussion protocols.

The new protocols add the term “ataxia” as a “no-go” symptom. Any player showing signs of ataxia – an abnormality of balance/stability, motor coordination or dysfunctional speech caused by a neurological issue – is prohibited from returning to a game.

Tagovailoa would have been ruled out of the game against Buffalo and likely Cincinnati had that rule been in place.

The league is not yet done evaluating and potentially changing the protocols.

“The Protocol exists to establish a high standard of concussion care for each player whereby every medical professional engages in a meaningful and rigorous examination of the player-patent,” the NFL and NFLPA said in the statement.

“To that end, the parties remain committed to continuing to evaluate our Protocol to ensure it reflects the intended conservative approach to evaluating player-patients for potential head injuries.”

Football fans were skeptical of the findings.

If you believed that his back hurting made him stumble like that you deserve to be fired. https://t.co/zhIfAmC1iR

But most just hated how long the explanation was.

Alotta words to say we knew he had a concussion but still let him play https://t.co/TextjXtIPq

I’m happy for you or sorry that happened https://t.co/HCaXXPj6n3

Hard to believe that’s the reaction the league or NFLPA were hoping for. But that’s what happens when one of the league’s brightest stars gets taken out.