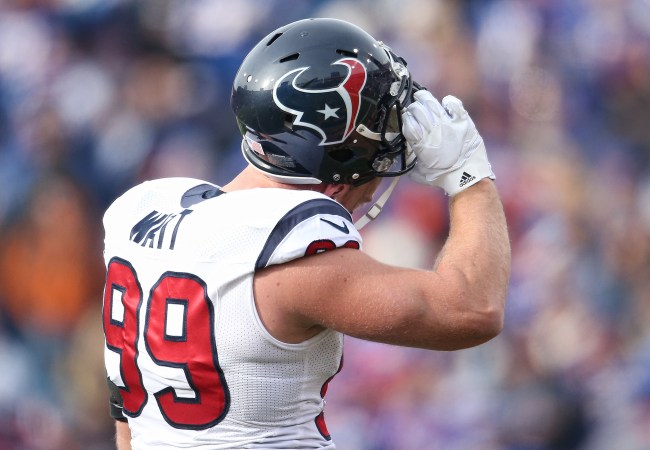 Can you imagine your fanbase still reeling from “the worst trade of all-time”, only to have the best player on the other side of the ball voluntarily bow out of the upcoming season due to an issue with the dress code?

I wouldn’t wish that unforgiving fate on even a Jets fan.

We are mere days removed from J.J. Watt threatening to sit out the season if the NFL forces its players to wear protective face shields to combat coronavirus. Watt said he rocked a shield his second year in the league and immediately trashed it in the middle of practice because he felt like he was “gonna die out here.”

The NFL just unveiled the proposed Oakley Mouth Shield, designed by Oakley and in collaboration with doctors and engineers from the NFL and NFL Players Association. The shied is expected to be distributed to all 32 teams over the next week for consideration, according to ESPN.

First look at the Oakley mouth shield that will be sent out to NFL teams this week in hopes of protecting players from COVID-19.
Currently, there is no mandate to wear a face shield, but the NFL's medical experts are advocating for it.

The face shield has holes in it… pic.twitter.com/s2VotFaQv6

The Oakley Prizm Lens Technology used by skiers, military personnel and, most recently, NFL players for enhanced color and contrast in their visors is featured in the new design. Plastic sheets extend down and attach to the face guard. There are airways and openings on the mouth shield but none that allow the direct transmission of droplets, according to the chair of the NFL’s engineering committee, Dr. Jeff Crandall.

Let’s check in with Mr. Watt about his take on the proposed shields.

How long can a burrito sit at room temperature and still be good to eat?

We will keep you updated on this ongoing story.