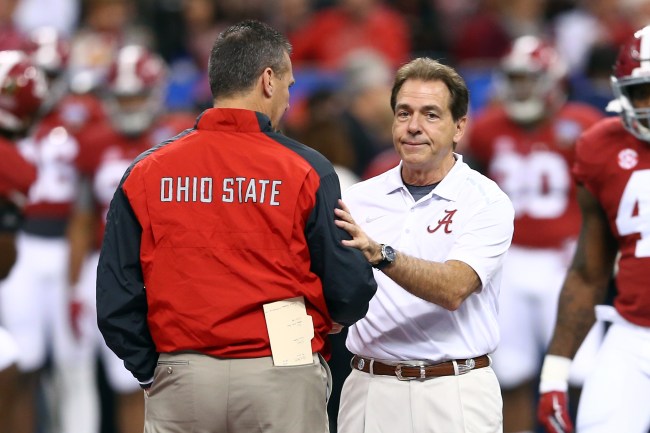 For the seventh time in the past 12 years, Nick Saban has led his Alabama Crimson Tide to the College Football National Championship Game, with the SEC powerhouse set to take on the Ohio State Buckeyes for all the marbles. While the Buckeyes have been nearly as dominant as Saban’s Tide teams over that same timeframe — and boast former blue chip recruits and future NFL first-rounders — could the Bama head coach be overlooking his upcoming opponent?

On the surface, probably not, as Nick Saban prepares for cupcake schools as intensely as he does blueblood programs. But given the Tide isn’t playing Clemson — a team that has proven it can beat them in the past — it might be possible to think that the Alabama head coach feels a little relief seeing Ryan Day on the opposite sideline coaching against him rather than Dabo Swinney. In fact, ESPN analyst Paul Finebaum believes Saban secretly wanted to play Ohio State, suggesting a few simple reasons why during an appearance on WJOX.

“In a weird, quirky sort of way, I think deep-down, Nick Saban is happier seeing Ohio State across the field than Clemson,” Finebaum said. “And it’s only because of the history. We all know Alabama and Clemson’s history. I think that’s a program down in South Carolina that knows it can beat Alabama. I don’t think what happened in 2014 has any impact on this game. This is a completely-different world we’re living in.

“I think Saban will probably prefer to take his chances against Ryan Day’s team than another matchup against Dabo Swinney. Although, really, these days with Dabo Swinney, you kind of invite that challenge because you don’t know how Dabo Swinney is going to affect the outcome of the game through his mouth.”

It’s an interesting take from Finebaum, who offers up a simple point: Clemson has beaten the Tide before, and head coach Dabo Swinney seemingly has a secret formula to playing Alabama in big-time games. Ryan Day, Ohio State’s head coach, has yet to prove that. And while Day’s a fantastic coach who has kept the Buckeyes running like a fine-tuned machine since permanently taking over for Urban Meyer after the 2019 Rose Bowl, he hasn’t faced the beast known as Nick Saban in a College Football Playoff game.

Ohio State did beat Saban’s Bama team in the inaugural College Football Playoff in 2015 during a semifinal matchup, but that was when the aforementioned Meyer was still stalking the sidelines. Saban undoubtedly respects Day, but he might not consider him a threat like Urban or Dabo would be given their resumes.

Who knows how this year’s College Football National Championship will play out, but given the rich history of both programs, it should be a doozy. If nothing else, Finebaum’s suggestion about Nick Saban may serve as extra fodder to further motivate the Buckeyes, which proved to Swinney that overlooking them isn’t a good idea.