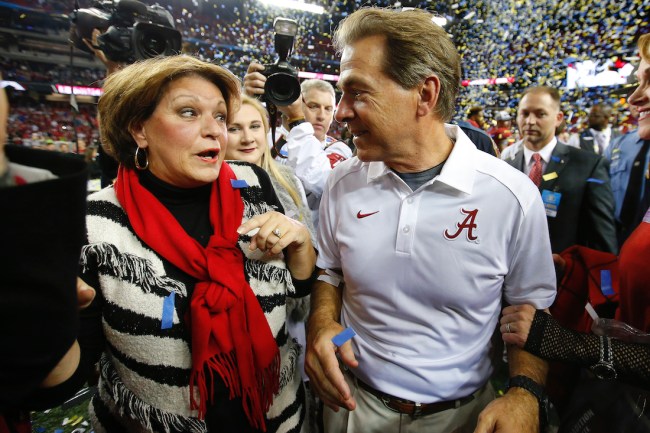 If there’s one thing we know about Nick Saban, it’s that the Alabama football coach doesn’t necessarily reveal too much about himself. Similar to his former boss, Bill Belichick, both Saban and the Patriots’ head coach rarely let down their guards to talk about themselves and be, you know, human. Instead, it’s like they’re both just robots who are socially awkward and immune to doing anything unrelated to football.

Obviously, that’s not the case, though, as both Nick Saban and Bill Belichick are just uber competitive, and are too busy winning to talk about mindless things that regular Joe Schmoes find amusing. But every once in a while, we get a little glimpse of what the legendary coaches are really like — and one of them recently happened at a speaking engagement of Saban’s.

Talking at an American Football Coaches Association banquet, Saban described his pursuit of his now wife, Terry Saban, from back in high school. Starting all the way back to their younger days, the Alabama football coach was nothing more than a gas station worker then, which didn’t exactly appeal to the sought-after Terry. Instead, she was dating some fellow named Mickey Schafer in town — until Nick Saban finally caught her eye thanks to his football pedigree.

Fast-forward some 30 years, Saban’s hometown was holding an appreciation night for him. Naturally, he wanted to swing by and sort of boast to Mickey Schafer about “winning” the arm of the now Terry Saban. I’ll just go ahead and let the Alabama football coach take it from there — which includes getting completely owned by his bride.

This is amazing stuff, and is a rare display of humor from Nick Saban. Like, in all my years of watching the Alabama football coach, there haven’t been many times when he’s dropped a story like this on others to show he’s capable of talking about something other than football. Plus, kudos to Terry Saban, because she really punked out her husband — while taking full credit for him holding down such success at Bama.

Hey, they say that behind every great man there’s a great woman, so, clearly, Terry is just leading the way for Nick Saban to become a college football GAWD! Hilarious to see the Bama coach reveal the story when he’s normally so reserved.