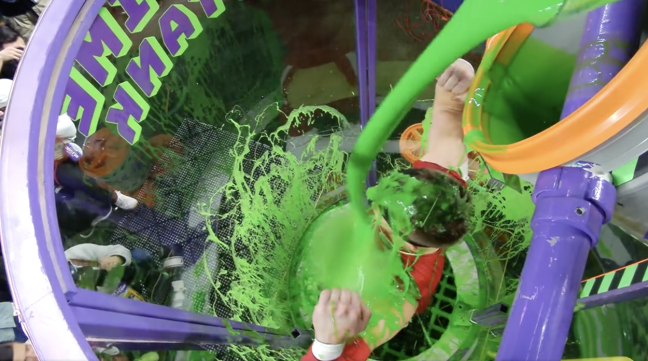 If you have watched Nickelodeon since the 1980s, you know that slime is a staple on the television channel. The mixture is vanilla pudding, apple sauce, green food coloring and a little bit of oatmeal. Simple enough,

In many cases, it is sprung upon guests, particularly at the Kid’s Choice Awards, without them knowing. Take Katy Perry in 2010, for example.

Anyway, slime is a crucial part of Nickelodeon’s day-to-day operations and a big part of the NFL broadcast. Here is the first touchdown from this year’s game:

The first sliming of the day…@EliMitch15 enters the SLIME ZONE! #FTTB

After the game in 2021, Nickelodeon took the slime from virtual to tangible. Saints head coach Sean Payton volunteered himself to be slimed if New Orleans won the game and that’s exactly what happened.

Nickelodeon kept the slime going throughout the 2021/22 NFL season.

this season's been full of slimetastic moments 💚🏈

see the @dallascowboys and the @49ers battle it out in #NickWildCard Sunday 4:30 ET/1:30 PT! pic.twitter.com/pAiYAPXQHM

This year, for the Wild Card broadcast, Nickelodeon took it up a notch.

After dumping a small bucket of slime on Payton’s head, Nick turned up the stakes. Ahead of 2022’s Wild Card game between the 49ers and Cowboys, a truck arrived at AT&T Stadium on Thursday.

The truck carried a custom-designed slime tank and 82.5 gallons of slime, which is 688 pounds of slime.

Of the willing participants, Juszczyk was selected.

We had an EPIC final sliming!

Kyle Juszczyk stepped into the booth to rep his @49ers #NickWildCard win 🧃💚 pic.twitter.com/V4rs3lwZ4m

It was glorious. And with how much hype there was surrounding the Slime Tank, there were a lot of expectations. Juszczyk lived up to the hype. Maybe next year there will be more slime.