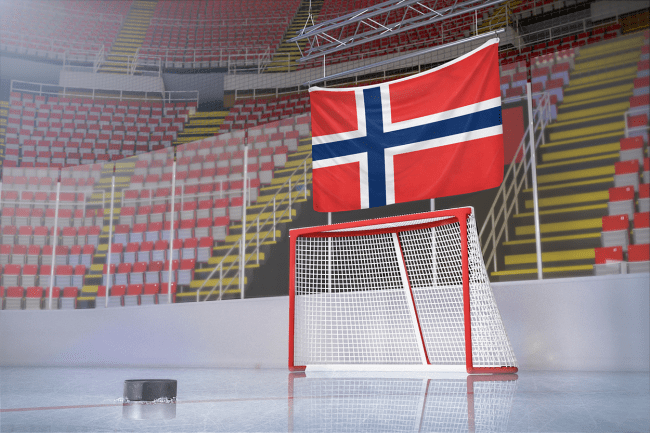 A Norwegian hockey player has been banned from his team for an incident that occurred earlier this week. During a standard team practice, Rasmus Ahlholm absolutely CLOBBERED his own teammate with a vicious cross-check for seemingly no reason.

The nasty hit took place in Hamar, Norway on Monday. During a normal weekday practice for Storhamar Ishockey, the team broke out into a three-on-three sequence.

At some point during the session, Alholm delivered the dirty hit. Instead of making a play on the puck, Alholm let it slide right past him and aimed right for his teammate, Jacob Lundell Noer.

Lundell Noer, not expecting a hit to come in the manner that it did, made little effort to get out of the way. It was his own teammate, after all.

And yet, to his surprise, Alholm came flying in at full speed and laid him out.

Upon meeting Lundell Noer on the ice, Alholm lifted his stick and cross-checked him directly in the face. It was a violent, targeted attack that seemingly came out of nowhere.

This is a team practice. 😯😬 pic.twitter.com/UzP9HVkY8k

Ahlholm, 31, was not at the team’s training the next day. The club is figuring out how to handle the nasty collision.

Meanwhile, Ahlholm says that it was not intentional.

He claims that he and Lundell Noer had been on each other back-and-forth during the training session. He says that tensions were boiling between the two and it led to the accidental clobbering of his own teammate.

Ahlholm believes that the video makes it very clear. He was going to lay a hit, but Lundell Noer was going after the puck. As a result, Ahlholm says, the two were on different planes and it made for the nasty hit.

“I completely misinterpreted the situation,” Ahlholm said. He is remorseful and has apologized to Lundell Noer.

However, a hit like that should never take place amongst teammates during practice. The club knows that and is figuring out how to handle things internally.

“This is something we take very seriously,” said chairman of the Storhamar board Stein Onsrud. “This is not good at all. We will follow it up. It is a personal matter that must go its own way, so I can not say what the consequence will be.”

Lundell Noer has not yet commented on the situation. Fortunately, he was back on the ice during the next day’s practice.

Regardless of what happened, or what the outcome ends up being, Ahlholm simply should not be doing that. Pull up, don’t lay the hit— it’s pretty simple.

Man, he CLOBBERED him.