Odell Beckham Jr. Gets Called Out By Warren Sapp For Playing Like Crap While Flaunting A $350,000 Watch 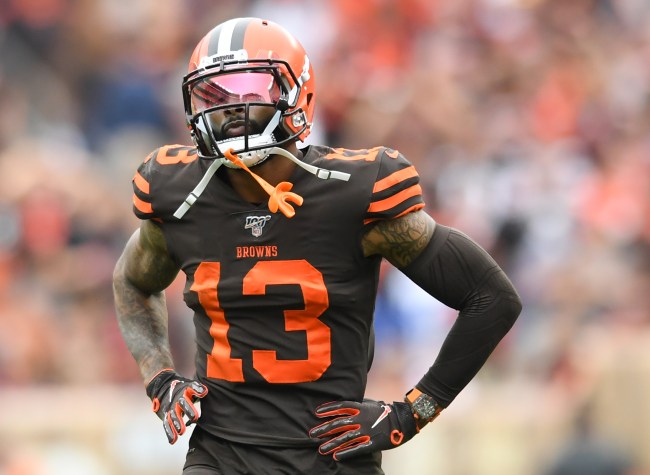 Odell Beckham Jr. showed up to his first game with the Cleveland Browns last week flaunting a $350,000 Richard Mille watch — which he actually wore during the game, much to the dismay of the NFL — but Hall of Fame defensive lineman Warren Sapp has a message for OBJ: If you’re going to wear the goods, you better bring the goods on the field.

While talking to USA Today Sports, Sapp did admire the look that the flashy wide receiver repped during the Browns’ Week 1 blowout loss against the Tennessee Titans, but thinks that, in order to pull a stunt like that, Odell Beckham Jr. has to do more on the field to show he’s worth that kind of bling. Here’s what Sapp said about Beckham’s poor play in such an expensive style accessory, even going as far as adding that the wideout’s trying to draw all the attention to himself, and not about his new team.

“You can’t wear a $350,000 watch and play like a $2 bill,” Sapp, the Hall of Fame defensive tackle, told USA TODAY Sports. “That don’t get it done. It was a nice-looking watch. Matched the uniform and everything. But I’d love to see you in the end zone, dancing or something. C’mon, man.”

“I have no doubt that it’s all about you, son,” Sapp added of OBJ, alluding to Cleveland’s season-opening loss against Tennessee. “You want to talk about your watch? The score is my concern. Whenever I hear one of these prima donnas put their issue in a team statement, then I’d be a little more accepting about it.

I mean, Warren Sapp does sort of make a valid argument here. While Beckham is clearly trying to win football games, showing up with a $350,000 watch wrapped around his wrist sort of brought the attention onto him, rather than the team — which is probably a good thing, given the fact the Browns got spanked 43-13.

And while Sapp was quick to call out Odell Beckham Jr., it may just be coming from a place of love; because, he, too, once played with expensive jewelry on during a game, but quickly regretted the decision after the $3,500 diamond earrings he had in slipped off.

“It was muddy, nasty,” he recalled of the field conditions. “I came out in the third quarter, took my helmet off, my homeboy Pep (former Buccaneers defensive tackle Brad Culpepper) looked at me and said, ‘Your earrings got knocked off.’ I was like, ‘What?’ I touched both of my ears and they were gone. That was $3,500. I said that’s the last time. That’s the cheapest lesson I’m going to learn in this this league. That’ll never happen again.”

He remembers Culpepper asking him on the sideline: “How much were those?”

With the NFL cracking down on Beckham’s attempt to wear the watch in future games — something he says he’s still going to try and do — the All-Pro wide receiver might want to learn a lesson from Sapp and just avoid wearing such gaudy things on a football field; especially when you play like crap and your team gets blown out.