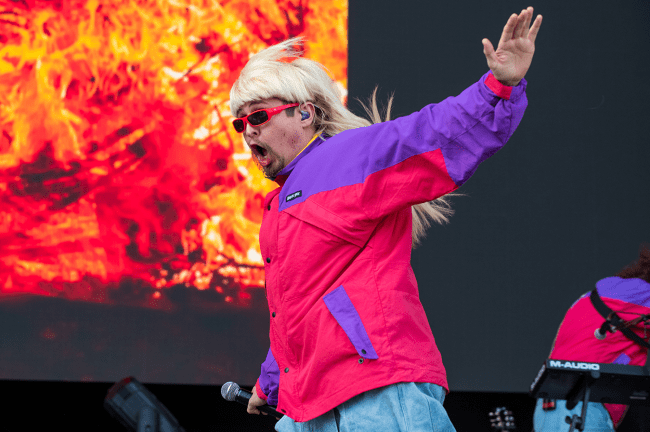 There have been some very bad first pitches at baseball games.

In fairly recent history, we have seen 50 Cent completely destroy his street cred by chucking his first pitch wide, wide left. Conor McGregor, on the other hand, went wide, wide right. Steve Aoki went neither left nor right and yeeted his first pitch miles above home plate. Steph and Ayesha Curry made it very apparent that they had not practiced their simultaneous first pitches and nearly took out an A’s staffer. A White Sox fan absolutely nailed a cameraman with her attempt.

None, however, were as terrible as what went down on Wednesday night.

Oliver Tree, a singer, songwriter, producer and comedian known best for his smash hit ‘When I’m Down,’ was given the honor of throwing the first pitch ahead of the Padres’ game against the Tigers. It did not go well. At all.

Rocking his signature blonde bullet (bowl cut + mullet) and some extremely baggy flare jeans, Oliver Tree toed the rubber in San Diego. His family was in attendance and the stakes were high.

What happened next was absolutely brutal. Oliver Tree took a bizarre wind-up, cocked back and unleashed his pitch with incredible force, tripping in the process.

The ball didn’t even get past the mound. He spiked it directly into the dirt in front of him and watched it roll to the left of home plate.

My entire family flew in from across America to watch my first pitch at a baseball game and I ate a bunch of mini corn dogs that made my hands all greasy and i embarrassed myself on national television pic.twitter.com/8Eud1yy2VT

Oliver Tree is blaming the bad, nay — abysmal, first pitch on the mini corn dogs that he ate before taking the mound. It is a completely fair excuse, we’ve all been there. But it doesn’t take away from the fact that he will forever live in history for the worst first pitch of all-time. Not just one of the worst, but the worst.