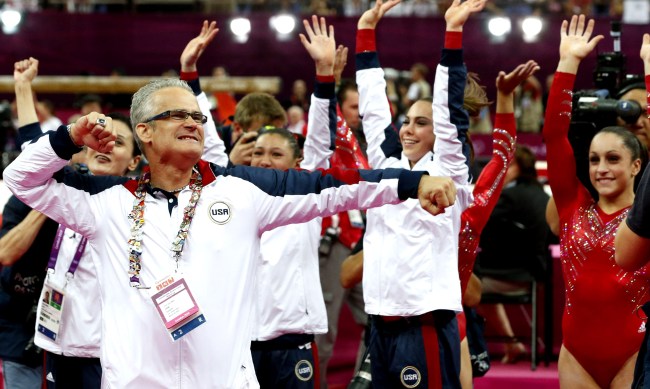 UPDATE: Mere moments after the publication of this story, Geddert was reported to have committed suicide.

Geddert reportedly fatally shot himself just hours after he was charged with the multiple felonies.

Police found his body in Grand Ledge, Michigan, according to a spokeswoman for Michigan Attorney General Dana Nessel.

Geddert had agreed to surrender at a sheriff’s office on Thursday before a 2:15 p.m. arraignment but failed to appear, reports NBC News.

John Geddert (pictured above), coach of the 2012 USA women’s gymnastics team known as the Fierce Five, was charged with 24 felonies including human trafficking in Michigan.

Those charges could lead to a life sentence for Geddert who worked for more than 25 years alongside convicted sex offender and former Team USA gymnastics doctor Larry Nassar.

Nassar was found guilty of three charges of sexual assault against gymnasts at the Twistars USA Gymnastics gym, previously owned by Geddert.

Among the lies Geddert allegedly told law enforcement involved Nassar’s role at as a team physician at Twistars, saying he had never heard any complaints about Nassar, denying he was aware of any athletes receiving intravaginal treatments at Twistars, and saying males were not allowed in the female locker room, according to USA Today.

A lawyer from the Michigan’s attorney general’s office also said Thursday that Geddert knew Nassar was sexually abusing his patients and lied to police about it during a 2016 investigation into Nassar. The remainder of the charges against Geddert are all tied to his own behavior with gymnasts he coached at gyms he owned in Michigan.

Law enforcement started investigating Geddert in February 2018 in the wake of complaints raised about his abusive coaching style during Nassar’s sentencing hearing.

Court documents released Thursday allege that, among other things, Geddert in January 2012 digitally penetrated a girl who was between the ages of 13 and 16.

“John Geddert used force, fraud and coercion against the young athletes that came to him for gymnastics training for financial benefit to him,” Michigan Attorney General Dana Nessel said on Thursday at a press conference.

“The victims suffer from disordered eating, including bulimia and anorexia, suicide attempts and self harm,” Nessel said, adding that Geddert subjected his gymnasts to “excessive physical conditioning, repeatedly being forced to perform even while injured, extreme emotional abuse and physical abuse, including sexual assault.”

ESPN states Geddert “has long been viewed within the gymnastics community as one of Nassar’s chief enablers.”

“We now know that dozens of promising young athletes had their lives ruined by Larry Nassar at John Geddert’s gym. The survivors of this horrendous abuse can now look forward to Geddert being held criminally responsible for enabling the most prolific serial sexual abuser in the history of sport,” Sarah Klein, one of Nassar’s victims, told ESPN.

Nassar was sentenced to 60 years in prison and faces up to an additional 175 years when he is sentenced on state charges in Ingham and Eaton County Michigan.