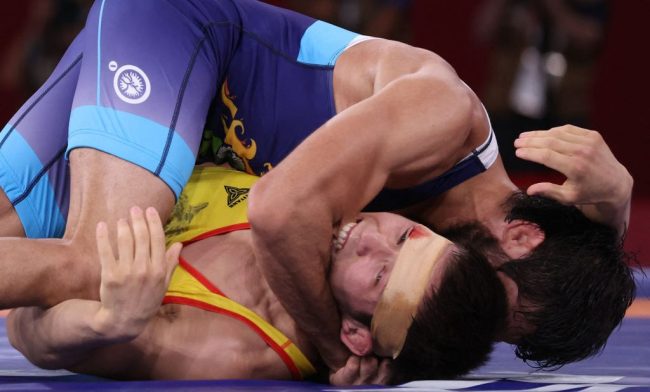 Biting is not a commonly-used tactic in the sport of wrestling. In fact, if a wrestler bites his or her opponent, it warrants a call for flagrant misconduct and could lead to disqualification.

Kazakhstan’s Nurislam Sanayev doesn’t care. During yesterday’s Olympic semifinal in the 57kg men’s freestyle wrestling competition, he went in for a taste of flesh.

Sanayev, a two-time world wrestling championship medalist, was visibly frustrated during his match against India’s Ravi Kumar Dahiya. He led 9-2 at one point but allowed Dahiya to stage a dramatic comeback and take the lead.

After being pinned to the ground, Sanayev attempted to dislodge himself from Dahiya’s grip. To do so, he opened his mouth and chomped down on the arm of his opponent. 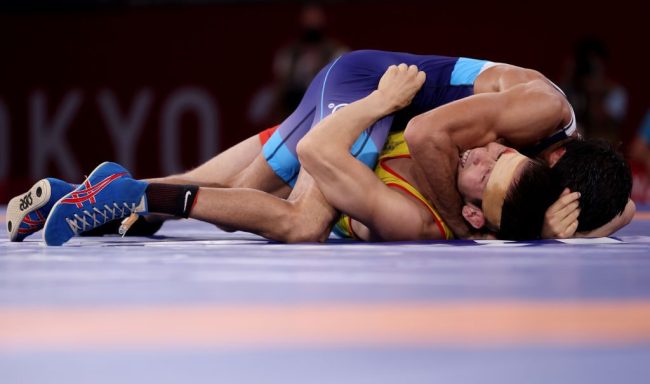 Dahiya, however, did not give up the hold. He sustained the last-minute takedown to win the match. It will go down as one of the most iconic moments in Indian wrestling history.

The resulting mark on Dahiya’s arm was telling as to how significant the bite really was. Sanayev left a definitive, full-jawed set of teeth on the victor.

Kazakhstan wrestler Nurislam's severe bite on biceps of RaviKumar Dahiya could not Pain Ravi to focus at his Olympic gold for India. All Indians praying for gold to Ravi and our best wishes to come out with flying colour!!! Jayaho Ravi Kumar Dahiya!!! pic.twitter.com/ks6HRJr9YP

“It was paining when Ravi returned from the mat, but he was given an ice pack and he is fine,” said a member of the Indian wrestling team’s support staff.

Dahiya’s pain subsided quickly and he geared up for the Olympic final. He faced two-time world champion Zaur Uguev from Russia, but lost 7-4.

Despite the disappointing final result, for him to bring a silver medal home to India in wrestling was a tremendous honor.