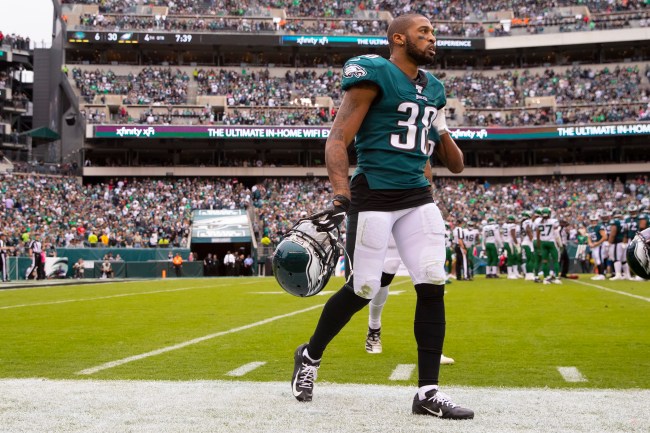 Orlando Scandrick is pouring gas on the dumpster fire that is his former team, an anger likely exacerbated by the fact that the 32-year-old corner was released on Monday one day after giving up the first touchdown of the Week 7 blowout loss against his former team, the Dallas Cowboys.

Scandrick appeared on FS1’s “Undisputed” this morning and revealed that the 3-4 Eagles are still coasting from their Super Bowl victory two seasons ago and there are major accountability issues within the locker room.

“That locker room is different. I would tell guys when I came there like I still feel like they were living on that Super Bowl high,” Scandrick said. “It’s over, you’re living in the past. Some of those guys came in the league and the first thing they experienced was 13-3 and a Super Bowl and that’s what they think it’s all about.”

Scandrick continued by saying that there are player within the locker room that would prefer Nick Foles over Carson Wentz, but that isn’t necessarily a knock on Wentz, it’s just congruent with the ‘living in the Super Bowl season’ attitude.

When asked about veteran Lane Johnson’s comments about players being late for meetings and practices, Scandrick claims there’s “accountability issues going on there and it starts from the top.”

“Instead of going out and attacking somebody being late, the first thing you should’ve done is look in the mirror and maybe went to that guy and pull him aside and say, ‘Hey, we can’t be late, we got to get this together, we got to set examples, we’re the vets on this team.’ They’re not talking about a rookie being late, they’re not talking about just some guy that’s a 52nd, 53rd man on the roster some guy that doesn’t play and isn’t active being late, that comment is about someone with significance,” Scandrick said.

The cornerback saved his most scathing comments for general manager Howie Roseman and safety Malcolm Jenkins.

“I don’t believe anything that Howie says. Howie is one of the people that if he told me it was raining outside, I’d probably get some shorts just in case,” Scandrick said. “He put it to me that he wanted to play some younger players and they’re a mess on defense and they need to get some more defensive linemen, so we’ll how that works for them this weekend up in Buffalo.”

Speaking about Jenkins, Scandrick said “there’s some selfish people in that defense.”

Malcolm Jenkins did not appreciate this sentiment one bit.

Malcolm Jenkins on Orlando Scandrick’s comments: “For us to move on as a team, we can’t have motherfuckers like that in the room.”

And to think, it was just two short seasons ago that Lane Johnson ripped the Patriots for being a “fear-based” organization that isn’t allowed to have fun, while playing for the Eagles is essentially a party. It has now devolved into a pity party. Sad.