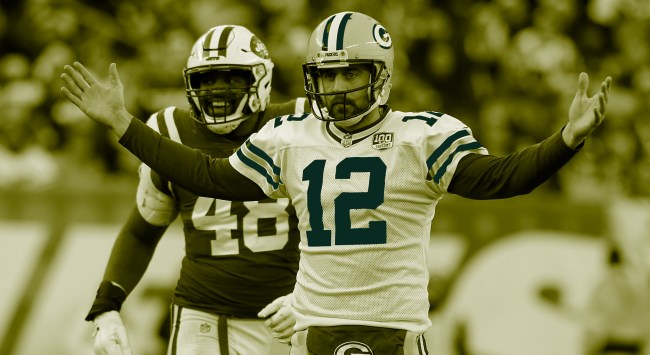 The Green Bay Packers almost didn’t have to worry about all the drama surrounding quarterback Aaron Rodgers over the years, and especially of late, because if the team’s coaches had gotten their way back in 2005 they would have passed on the QB during the NFL Draft that year.

This according to a little known story told by former Packers vice president Andrew Brandt on a recent episode of The Ask Gary Vee Show.

During the interview Brandt recalled, “At that time we had maybe 20 players above a first-round line, okay? So we didn’t have 32 we had 20. 24 was our pick. 24. So two things happen that night. Number one, EVERYONE we wanted except one player got taken.”

Brandt then lists off a bunch of they players the Packers were hoping to draft that year including DeMarcus Ware, Marcus Spears, David Pollack, Derrick Johnson, and Adam “Pac-Man” Jones.

“The second thing that happened was no one has taken the quarterback Aaron Rodgers,” explained Brandt. “Now Gruden had told him he’s gonna take him to his face. Gruden takes Cadillac Williams. Okay. Tennessee, we thought they’re taking him. No, they took Pac-Man. Kansas City, we thought… no, they took Derrick Johnson. We’re coming up on this and now, Gary, you gotta picture this. I’m in the middle. W got management, Ted on the left with Mike, I’m sorry, Mike Sherman not McCarthy, is over here and and all these offensive coaches and stuff over here.

“We’re about to get up to our spot [in the draft] and these offensive coaches are yanking me and they’re like, ‘Andrew, we can’t do this… can’t take him, because we don’t need him.'”

So Brandt then had to wait to, hoping someone would call him to trade for the pick, and finally, after sitting on the phone with Rodgers, pretty much not saying a word because he didn’t know what was going to happen, with two minutes left on the clock, Brandt finally told Rodgers the Packers were taking him with the 24th pick.

Of course, as soon as the pick is announced Brandt immediately gets a phone call from Brett Favre’s agent, and the draft party taking place at Lambeau breaks out with a chorus of boos.

Amazingly, it all somehow worked out.