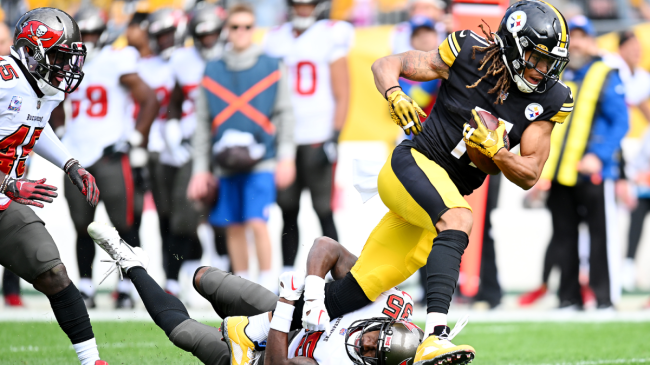 The current receiving corps consists of Romeo Doubs, Allen Lazard, and Amari Rodgers. Sammy Watkins has been injured since Week 2, and QB Aaron Rodgers is begging for veteran Randall Cobb to get more playing time.

Through six games this season, the Packers rank 15th in the NFL in passing offense just a season removed from Rodgers’ MVP campaign. The quarterback’s 233 yards per game would be his lowest output in a season as Green Bay’s full-time starter.

Making things worse, the Packers are just 4-3 having lost back-to-back games to the Jets and Giants.

But help could be on the way. Green Bay is rumored to looking at a major wideout target to help bolster the receiving room.

The Packers could look to land Chase Claypool in a potential trade with the Steelers.

Here’s what ESPN’s Jeremy Fowler had to say:

A few general managers I’ve spoken to are certain Green Bay is looking for potential receiver help on the trade market. One player who makes sense is Pittsburgh’s Chase Claypool, who multiple execs believe was available in the preseason, though at a hefty price.

Claypool is coming off a big seven-catch, 96-yard game to get back on track, so perhaps that makes him more attractive for the Steelers to keep. The rumors of his availability have persisted for a while now, though. He’s a major talent whose production has declined in each of the past two years.

Claypool got off to a slow start this year, but he exploded for a season-best 96 receiving yards in the Steelers’ win over Tampa Bay last week. And he celebrated that performance in the best way possible.

On the year, he’s tallied 23 catches for 225 yards. This, after recording back-to-back 800-yard campaigns as a rookie and second-year player.

The only question is, would the Packers be willing to pay the lofty price of attaining Claypool? If it means giving Aaron Rodgers a proven weapon on the outside, the cost could be worth the reward.