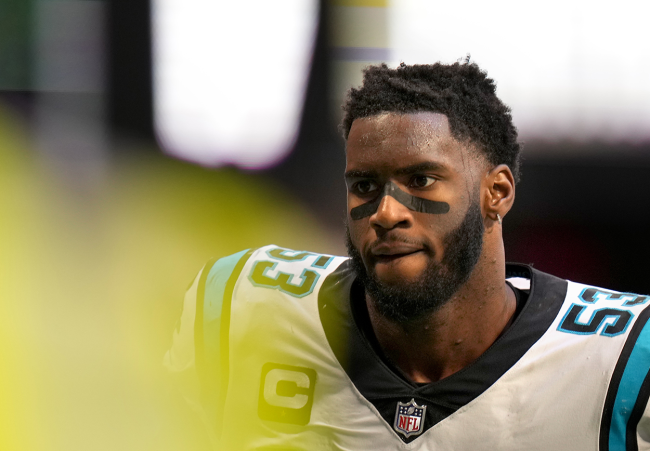 During last Sunday’s NFL game between Carolina and New England, Patriots quarterback Mac Jones was caught twisting the ankle of Panthers defensive end Brian Burns after a strip sack. The video was definitive and clearly showed a grab-and-twist maneuver.

In response, Jones gave his side of the story on Tuesday. He said that he was simply trying to make a tackle after assuming Burns had the ball.

Burns, who spoke with the media on Wednesday, clearly disagrees. He even went so far as to say that he “thinks it’s some bull.”

The 23-year-old said that Jones should should have realized that he did not have the ball once he saw no other player trying to tackle him. He also pointed out that — even if Burns did have the ball — what Jones did was still dirty and illegal.

LISTEN: Brian Burns goes into detail about the controversial play with Mac Jones, when the #Patriots QB brought him down by his ankle, after the sack/forced fumble:

Burns, a 2019 first round pick, also told the media that he would have appreciated any semblance of an apology, instead of Jones’ explanation or justification. And then he went on to send a savage message to all of his fellow defensive ends.

#Panthers pass-rusher Brian Burns says it would be nice if Mac Jones apologized for grabbing his ankle on Sunday, but he doesn’t expect it to happen. “I would just like to play them again. I wish all my fellow D-end brothers happy hunting.” pic.twitter.com/V3iQc8YBJY

It will be interesting to see whether Jones addresses Burns’ comments and continues the beef, or chooses to remain silent on the matter. Either way, Burns made himself very clear.

If his message was received by other defensive linemen across the NFL, Jones could be in for a long year.