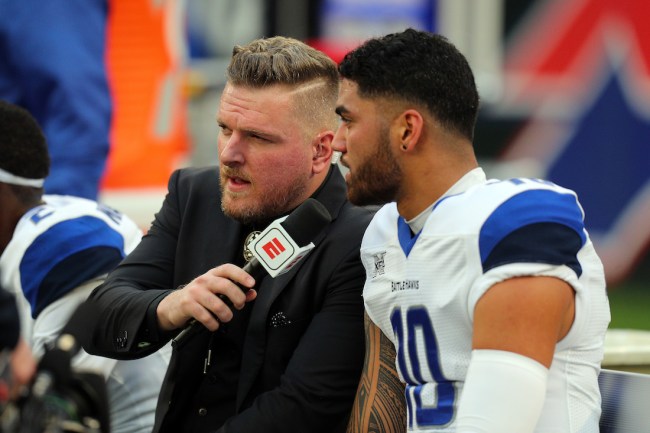 It kind of seems as if Pat McAfee can do it all, doesn’t it? After all, the former NFL punter and current media personality made the seamless transition from pro athlete to budding media star, which is far from easy to do — especially for a guy who didn’t exactly star as the face of an NFL franchise. But here’s McAfee just taking over the world in 2021.

Although the outspoken, witty and humorous McAfee has built quite the brand for himself to this point, one thing he sounds like he’ll never do again is try his hand at being a sideline reporter. As some of you probably remember, Pat was hired by ESPN to work XFL games in 2020, which didn’t exactly go as anyone expected. To say he bombed might be harsh, but, in his own words, it wasn’t for him.

During his show on Friday, Pat McAfee didn’t beat around the bush about his experience working the sidelines during XFL games that season, and was candid about why it didn’t work out for him. Take a look below at his reasoning.

I enjoyed watching it on TV during the 2nd run in 2020 but working on the sideline was not for me #PatMcAfeeShowLIVE pic.twitter.com/iEA5QLgMjw

Give Pat McAfee credit here for being as honest as possible about his critique of his sideline reporting work, because most people wouldn’t be so candid — especially since it didn’t really go all that well. Then again, the former NFL player was a little bit out of his element standing on the sideline trying to talk to players and coaches, and didn’t really play to his strengths with his usual off-the-cuff commentary.

Instead, McAfee was being fed questions from producers in his ear as he asked traditional reporter questions about the game being played. Unfortunately, it just didn’t work well, even if the event itself, the XFL, seemed like it’d be a good fit for him.

Who knows what might happen in his future, but Pat McAfee would be ideal for a no-holds type of broadcasting event, where he can be himself and just speak his mind. There have been talks about him doing Monday Night Football in the past, but even that doesn’t seem like a great fit, given his unconventional approach — so maybe he’ll end up hosting some sort of reality show to parlay off the success of his own radio show.