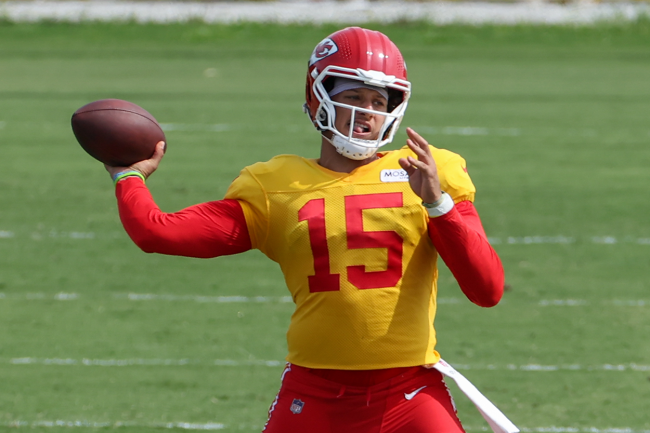 There are very few athletes who are as mind-blowing as Patrick Mahomes. Anytime that the Chiefs quarterback takes the field, there is a high probability that he will do something that makes the fans in the stands ooh and aah.

The early portion of training camp has been no exception. Through the first few weeks of practice, Mahomes has continuously practiced a behind-the-back throw that he is seemingly trying out for an RPO. It raises the question of whether he will try the insane throw during a game, but only time will tell.

In the meantime, he only continues to try crazier and crazier things. On Tuesday morning, as Kansas City tried to get out and beat the heat, Mahomes dug back into his bag of tricks.

First, the 26-year-old took the snap and threw one behind his back to his coach. It was nothing out of the ordinary.

And then he took things up another notch and went between the legs. Mahomes took the snap from under center and then proceeded to snap the ball between his own legs to the coach standing behind him.

The move did not appear to have any correlation to the drill at hand. Nor does it translate particularly well to a real game.

However, maybe the Chiefs have something cooking behind-the-scenes that involves a through-the-legs pass. It’s unlikely, but maybe.

At this point, Mahomes has to be trolling. He knows that fans, media and everybody in between will hang on his every move. He knows that the spotlight is on him. In turn, whatever he does will be taken to the extreme and this is no exception.