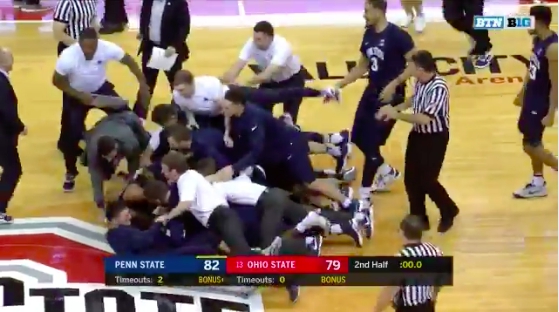 If you happened to be watching the Penn State vs. Ohio State game last night, you were generously rewarded. The 14-8 Nittany Lions edged out the No. 13 ranked Buckeyes thanks to a 35-footer at the buzzer no the road.

Penn State was up 79-76 when the most exhilarating 10 seconds of the college season thus far unraveled. Ohio State’s Keita Bates-Diop drilled a game-tying three with five seconds left in a battle that was primed to go into overtime.

That was until Penn State’s Tony Carr pushed it up the floor and heaved a 35-footer off the glass as time expired, handing Ohio State its first Big Ten loss of the season.

Other than the hitting the biggest shot of his college career, Penn State’s Tony Carr had a game. The sophomore point guard finished with a game-high 28 points, five rebounds and five assists, going 10-for-14 from the field and 4-for-5 from downtown. He scored 11 of Penn State’s final 13 points in an utterly dominant performance.

CBS Sports reports that the loss drops Ohio State to second place in the Big Ten as the only one-loss team in the league. For Penn State, the win was enormous, as it marks their first victory over a ranked team all season.