People Are Actually Butthurt About The U.S. Celebrating Every Goal In Their Historic 13-0 Rout Against Thailand In The World Cup 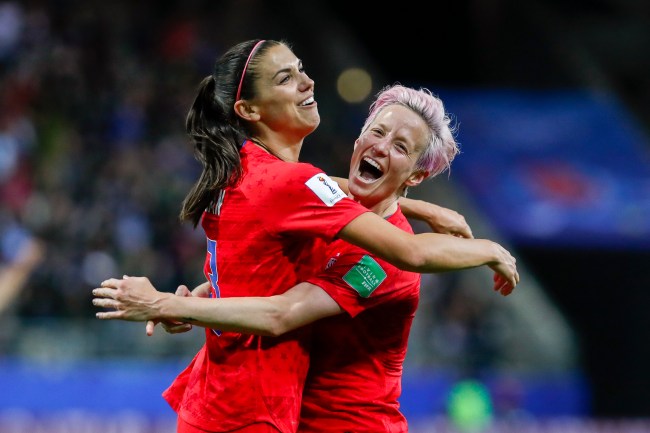 The United States Women’s National Team going full heel could be the greatest thing in American soccer since Brandi Chastain flashed the world. This U.S. Soccer Federation has spent billions on the development of the sport in this country, only to have field a men’s team that couldn’t beat the Big Green.

Welp, the American women are doing their part after dismantling Thailand to the tune of 13-0 in Group F on Tuesday in Reims, France. For perspective, the 13 goals is more than the U.S. men’s team has in the past three World Cups. It was the most goals scored by a single side in Women’s World Cup history AND the largest margin of victory in that tournament’s history.

Watch them all here.

Take a look back at all THIRTEEN goals the @USWNT scored against Thailand in their #FIFAWWC opener. 🇺🇸 pic.twitter.com/Q3JYYXOZ3X

The United States Women's National Team had 20 Shots On Goal today vs Thailand, the most in a game by any team over the last 3 Women's World Cups.

Here's a visual of where their shots on goal ended up. pic.twitter.com/qpB5ozu72E

The historic victory was met with more disgust than praise, as soccer talking heads did not appreciate the Americans celebrating every goal in a tournament they’ve spent their entire lives dreaming of and training for.

0.0 problem with the score line as this is THE tournament BUT celebrating goals (like #9) leaves a sour taste in my mouth like many of you. Curious to see if anyone apologizes for this postgame. #USWNT #FIFAWWC https://t.co/XfGh2e2Jms

My one-word reaction to the #USWNT tonight 😂 pic.twitter.com/ueOSQMrae2

1) Absolutely score as many goals as you possibly can. It's the World Cup. They can't cater for how poor the opposition is.

2) Cease the big goal celebrations after 6 or 7.

After beating Thailand 13-0 & celebrating each goal #USWNT may have lost fans, domestically & internationally…and sealed themselves as villains of the @FIFAWWC. I love it. But the soccer gods can be cruel and vindictive. If US goes on to fail, their behavior will be on a loop.

They're actually debating on the radio if the #USWNT win was domination or bullying pic.twitter.com/MDTKx2mVVU

Canadian national team members Clare Rustad and Kaylyn Kyle were some of the harshest critics of USWNT, calling their celebrations, “classless.” Meanwhile, Canadians are cheering for Durant’s injury and screaming about “f*cking Ayesha Curry in the p*ssy” on live television.

🇨🇦 Canada was not impressed by the #USWNT today. Clare Rustad, Kaylyn Kyle, and Diana Matheson rip Rapinoe and Morgan for what they call "classless behavior". #FIFAWWC pic.twitter.com/2U3eVCFb2M

It also should be noted that after the game, the entire American team demonstrated sportsmanship by embracing the Thai players.

So many people calling the US Women classless because they celebrated their goals. How about Alex Morgan and Carli Lloyd going over to comfort some of the Thailand players immediately after the final whistle? That’s class. #USWNT pic.twitter.com/nfcAhQ95CU

After the match, Megan Rapinoe addressed the controversy.

“Honestly, if anyone wants to come at our team for not doing the right thing, not playing the right way, not being the right ambassador, they can come at us,” Rapinoe said. “I think our only crime was an explosion of joy last night. We’ve been pretty pent up, as well. We’ve had kind of a heavy lead-up, obviously everything off the field… So, if our crime is joy, then we’ll take that.”

Come for the @mpinoe goal, stay for the celebration 😅 pic.twitter.com/DhF7Th17qj

I would become a USWNT soccer fan for eternity if after their next win they plant an American flag at midfield, Baker Mayfield style.