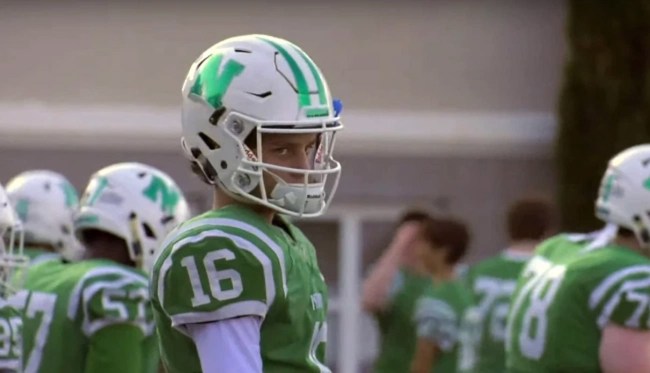 The son of Cooper Manning, of course, won that award playing quarterback for the same high school, Isidore Newman School in New Orleans, that produced both Eli and Peyton Manning.

One big difference with Arch, however, is that neither Eli nor Peyton started at quarterback for Newman as freshman like Arch did as a 14-year-old in 2019.

Arch, who certainly benefitted from the combined 48 years of NFL experience and four Super Bowl wins of his famous uncles and grandfather, ended the 2019 high school football season with 2,407 yards passing, 34 touchdowns, and 6 TDs rushing while throwing just six interceptions as Newman went 9-2 and made it to the quarterfinals of the state playoffs.

Thus far, Arch Manning’s parents have wisely kept him off of social media, refusing interviews and not accepting any scholarship offers, of which there certainly would be many.

Ross Delenger recently wrote in an article for Sports Illustrated…

“They’re very private and protective of Arch,” says John Georges, a New Orleans businessman who owns the state’s two largest newspapers. “As much as they try to keep a lid on it, there’s a buzz. Certain people know how to raise thoroughbreds. The Mannings know how to raise athletes.”

Arch’s high school coach also told Sports Illustrated that when he gets approached about college scholarship offers he tells the recruiters, “We just say, ‘There’s no offer to give because there’s no offer to receive.'”

This week Jeff Duncan of The Athletic made it even harder for colleges to stand back and not interfere with Arch as he revealed that since the football season ended Manning has had a rather significant growth spurt.

Thanks to a growth spurt and some diligent work in the weight room, Newman QB Arch Manning has gone from 6-1, 165 pounds to almost 6-3 and 190 this summer, according to Cooper & Archie Manning. He looks primed for a big sophomore season at Newman, assuming there is one in 2020.

After his stellar freshman season, now being 6-foot-3 and 190 pounds as a 15-year-old sophomore has to have college coaches salivating.

According to 247Sports’ recruiting profile for Manning, there are five schools listed: Ole Miss, Duke, Georgia, Tennessee, and LSU.

Three of those are logical as Eli, Archie and Cooper all went to Ole Miss, Peyton went to Tennessee and Arch lives in Louisiana. The fact that Duke and Georgia are also listed makes one wonder what 247Sports knows that the rest of the college football world doesn’t.