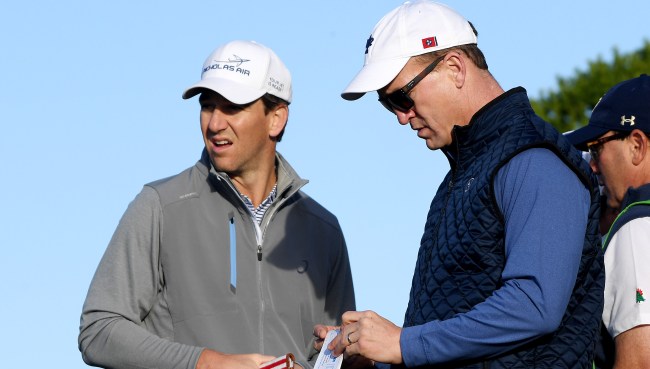 On May 23, 2020, a historic moment occurred when a member of the legendary Manning family finally joined Twitter. Posting a video from the movie Hoosiers, Eli Manning wrote, “To paraphrase Jimmy Chitwood, ‘I don’t know if it’ll make any change, but I figure it’s time for me to start playing social media.'”

Then, with his brother Peyton playing in The Match with Tiger Woods, Tom Brady, and Phil Mickelson over Memorial Day weekend, Eli proceeded to tweet up a freaking storm.

Hope your golf game is as polished as your Twitter game. Don’t hit it in the lumberyard. https://t.co/SaPL34P2T2

If that rain delay had gone longer, I was getting ready to join @tiktok_us to kill time.

On Thursday, Eli’s brother Peyton, who proved over the weekend that he really needs to be in a broadcast booth, just not with his brother, made an appearance on The Rich Eisen Show and was asked if he too was planning to finally give in and join the world of social media by creating a Twitter account.

His response was pure Peyton.

Peyton did admit that despite not having his own accounts, he does still see a little bit of what’s going on on social media.

“I can kind of keep up a little bit, you know, but I’m probably not as up to date as probably everybody else,” he admitted.

“Tiger and I said you know when early on, the four of us kind of had a group text, and we kind of said, ‘Wow it’s always been a goal for me and Tiger
to beat a couple of professional Instagrammers,” Peyton joked. “It was really high on our bucket list. So, but, so I’m probably a little bit old school that way. I lived a long time without it and before it ever existed, so I guess I kind of think I could probably keep keep surviving without it.”

That’s a darn shame because, my goodness, Eli has already proven that he’s good at it. Just imagine how freaking entertaining Peyton would be on Twitter.